The control of gene expression is an important tool for metabolic engineering, the design of synthetic gene networks, gene-function analysis, and protein manufacturing. This review article discusses the potential of the modular design of novel regulatory proteins fashioned after the topology and mechanochemical properties of the lactose repressor.

This ability to regulate sugar metabolism is just one example of the genetic switches discussed in a Review recently published in the journal WIREs Nanomedicine and Nanobiotechnology by Davey and Wilson at the Georgia Institute of Technology, titled “Deconstruction of complex protein signaling switches: a roadmap toward engineering higher-order gene regulators.”

Cartoon schematic of the lac operon. A. Find out more here. 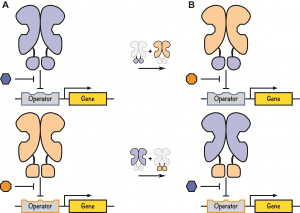 Cartoon representation of repressor design. A. Find out more here.

As a result, these repressor proteins can serve as the blueprints for new molecular machines and aid in the construction of synthetic biological circuits. The versatility of this regulatory machinery can be exploited to produce synthetic biological circuits that could in theory be expanded to the programming of specific cellular responses to multiple input stimuli. This idea can be conceptualized in a manner similar to that of a computer. By creatively recombining components of nature’s regulatory proteins, new orthogonal switches can be engineered. The nature of these novel switches will be a valuable tool for synthetic biology, bioindustrial, and biomedical applications in the near future.

Synopsis by James A. Davey and Corey J. Wilson, School of Chemical and Biomolecular Engineering, Georgia Institute of Technology

A DNA robot that walks on the surface of cells
Can Microalgae Make Martians of Humankind?
A new, inhaled siRNA therapeutic option for asthma
Machines with a Sense of Smell