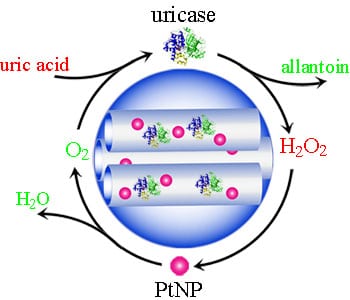 Enzyme replacement therapy (ERT) holds great potential for treating enzyme deficiency related diseases by compensating for decreased, missing, or lost body function with enzymes produced in vitro. However, it often shows limitations arising from the vulnerability of enzymes and the generation of undesirable toxic intermediates. Hyperuricemia, known as the over-high level of uric acid (UA) in plasma, is a uricase deficiency related disease that is considered to associate with gout, renal disease, hypertension, and cardiovascular diseases. Therefore, uricase is an efficient drug for hyperuricemia therapy since uricase can specifically catalyze the decomposition of UA to allantoin and H2O2. However, the administration of uricase alone suffers from many shortcomings. On the one hand, uricase is vulnerable to proteolytic degradation, and its native conformation can be easily disrupted by even a slight change such as pH, high temperature and protease, resulting in the loss of its catalytic activity. On the other hand, the accumulation of toxic intermediate (H2O2) during the UA degradation would cause serious toxic side effects. To overcome these challenges, it is necessary to construct a system with both self-protection of uricase and toxic intermediates self-cleaning ability for treating hyperuricemia. 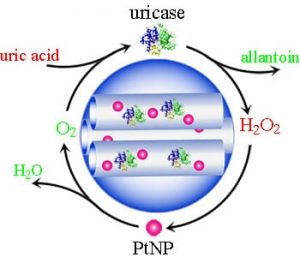 Recently Professor Xiaogang Qu’s team from the Changchun Institute of Applied Chemistry engineered an artificial metalloenzyme for efficient and friendly ERT of hyperuricemia. This artificial metalloenzyme consists of the uricase-PtNPs (platinum nanoparticles) tandem catalytic system and the outside silica defence layer. With the defence layer, this artificial metalloenzyme could be self-protected against various outside insults. At the same time, the tandem catalytic system could not only efficiently degrade UA to allantoin and H2O2, but also simultaneously catalyze the generated toxic product H2O2 to O2 and H2O with the help of the catalase-like activity of platinum nanoparticles. What’s more, the finally generated O2 could in turn facilitate the catalytic degradation of UA, as the degradation of UA is an O2 consumption process. The professor and his team demonstrated the H2O2 produced by UA could be simultaneously eliminated by the platinum nanoparticles, resulting in significant improvement on the HeLa cell viability. In vivo studies also displayed prominent therapy effect and no obvious side effects during the treatment of hyperuricemia mice using their designed artificial metalloenzyme. This research provides new insights into the development of efficient and friendly enzyme replacement therapy.