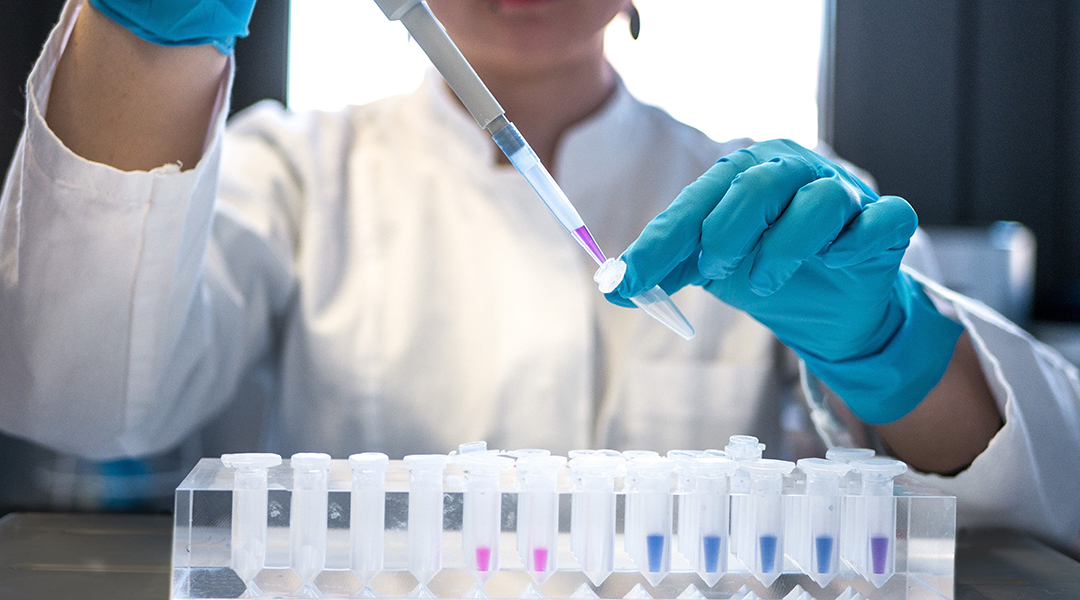 Rapid genetic changes in the influenza virus make vaccine efficacy less than ideal — often in the range of 40% to 60%. A new study presents a tool that could make vaccines more effective by manipulating a natural immune response. Researchers at the University of Oklahoma designed protein-like molecules that sent cellular stress signals, bolstering a protective response to an influenza vaccine in mice.

The body’s immune system has two arms. Innate immunity develops on first exposure to a pathogen and affords basic, non-specific protection. Adaptive immunity, a secondary, longer-lived response, helps the body’s defenses recognize and guard against a specific pathogen. Vaccines work by engaging this process and substances that help strengthen this response, known as adjuvants, are often used.

The immune system can also be set off by cellular stress. Cell membrane damage can lead to a type of cell death, called immunogenic death, that beckons immune molecules and cells. Known as damage-associated molecular patterns (DAMPs), these cellular signals modulate the immune response by recruiting immune cells to the site.

While pathogens can set in motion this defense mechanism, proteins aggregating in the cell membrane can sometimes be at fault. Presently, few vaccines use immunogenic cell death and DAMPs in a controlled fashion to launch a targeted attack against pathogens or cancer cells.

Handan Acar, a researcher at the University of Oklahoma, and colleagues were inspired by natural protein aggregates that disrupt cellular membranes to cause inflammation. Essentially, they ask whether engineered molecules could be used as adjuvants to provoke this pathway.

Seeking to mimic function, not form, they created molecules with a similar ability to clump within cell membranes and cause damage. Their goal was to cause just enough stress to cells to set DAMPs in motion, triggering the immune system. “We show that it is possible to use molecular engineering to create tools that can mimic the function of proteins instead of their structures,” said Acar.

Peptides are made of shorter strings of the amino acid molecules that make up proteins. In a previous study, Acar’s team crafted small peptides with the ability to self-assemble based on their charges. Using the same technique, they developed a peptide-based tool consisting of two different strands of amino acids with opposite charges which clump together when mixed as a result of the attraction between them.

“These peptides will be able to come together even in such a crowded environment of cell and tissue,” said Acar. When added to a culture of human ovarian cancer cells, these peptides easily and quickly aggregated. This led to cellular membrane damage, inducing both immunogenic cell death and sending DAMPs to recruit the immune system.

“They are creating stress on the cells to induce immune response to recruit and activate the innate immune cells towards the location,” said Acar. Moreover, the peptides successfully triggered this cascade across various cell types. “The charged peptides are not specific to any cell type — they are sort of promiscuous,” added Acar.

Once the peptide-based tool had been studied in several cell types, the team put their adjuvant theory to the test in mice. Would these peptides significantly ramp up the protection conferred by a vaccine?

To answer this question, they immunized mice with an influenza vaccine made of the hemagglutinin protein taken from the virus. This protein is known to stimulate the immune system, producing antibodies. 60 days after the first dose, the mice were administered a booster dose. To a different group of mice, the researchers administered a cocktail of the peptide-based tool and the hemagglutinin protein.

Mice that were injected with the combination showed immunity levels several times higher than vaccination with the viral protein alone. Since the peptides were small and inoffensive to the mice, no antibodies were produced when they were injected solo. Using engineered peptides as adjuvants, the researchers were able to induce resilient immunity to the influenza virus.

In their present iteration, the peptide-based tool was made to not be partial to a specific cell type. “We don’t want it to be targeted so that we can use it in a variety of applications to explore and exploit its capacity. Eventually it can be encapsulated and can be targeted with different agents,” said Acar.