The End is Just the Beginning: A Review of End-Functional Poly(3-Hexylthiophene)

Craig Hawker and co-workers from UC Santa Barbara review the synthesis and many applications of end-functionalized poly(3-hexylthiophene) (P3HT). 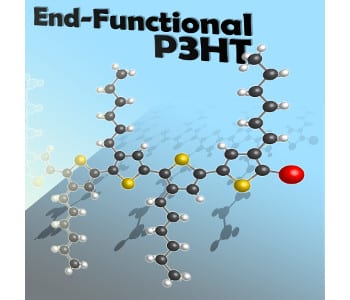 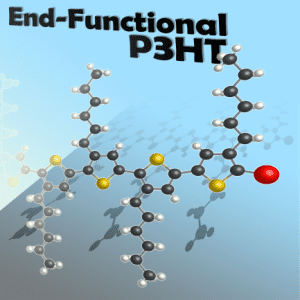 In the early 1970s, Japanese researchers were exploring new ways to synthesize polyacetylene. In one experiment, a thousand-fold too much catalyst was added. To their surprise, the product was a shiny metallic film, later identified as trans­-polyacetylene. Follow up experiments revealed that doping polyacetylene caused its conductivity to increase by millions of times. The age of conducting polymers had now arrived.

Decades after their debut, conducting and π-conjugated polymers continue to be crucial in the development of organic electronics. The low cost, synthetic accessibility, and readily tunable properties of these materials make them very attractive for numerous applications. One of the most important π-conjugated polymers to emerge is end-functionalized poly(3-hexylthiophene) (P3HT), which is the subject of a new review in the Journal of Polymer Science A: Polymer Chemistry. The authors, Prof. Craig Hawker and co-workers at the University of California, Santa Barbara, attribute P3HT’s prominence to “its outstanding characteristics including solution processability, stability, and excellent electronic properties. However, the evolution of P3HT as a standard building block is driven by its ability to be prepared with controlled molecular weight, regioregularity, and precise end-group functionality.” That P3HT can be easily prepared from standard cross-coupling chemistry and the Grignard metathesis polymerization contributes heavily to its role as a vital polymeric unit with well-defined end group functionality.

Hawker and colleagues begin their survey of P3HT chemistry by exploring three major synthetic methods for modifying P3HT’s end-functionality. The first tactic is functionalizing the end-chain using Grignard metathesis, a process in which thiophene-based Grignard species react with nickel catalysts. Using nickel-based initiators to install a well-defined functional group constitutes the second approach. The third major method is post-polymerization functionalization, whereby P3HT’s end-chains are functionalized after formation of the polymer.

After highlighting the major synthetic routes, the article shifts its focus to applications of end-functionalized P3HT in various functional materials. P3HT’s versatility and significance is clearly shown by its key role in surface functionalization and the preparation of block copolymers, rod-rod block copolymers, and rod-coil block copolymers; topics described in detail in the review’s second section.

Reflecting on the importance of P3HT in contemporary polymer science, Hawker and co-workers write, “novel macromolecular architectures and innovative coupling chemistry, coupled with the ability of nonexperts to access these unique materials provides significant opportunities to explore their role in applications ranging from biomaterials to energy production and storage.”