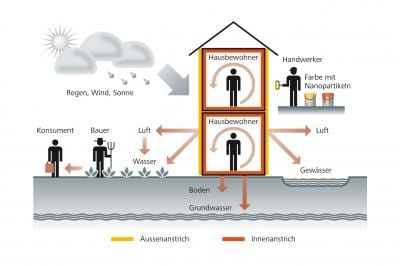 This shows nanoparticles in the house: where they come from and where they go to. Image: EMPA.

After 42 months the EU research project NanoHouse has ended, and the verdict is a cautious “all-clear” — nanoparticles in the paint used on building façades do not represent a particular health risk. In the course of a Technology Briefing Empa researchers discussed these results with specialists from the construction industry.

Five Empa laboratories were involved in the EU NanoHouse project, along with four other European research institutes and four industrial partners. The aim of the project was to investigate the opportunities and risks presented by the nanomaterials used in the surface coatings applied to building façades. For the first time not only were freshly manufactured products studied to see if they set free nanoparticles, but also aged samples.

Harald Krug, head of Empa’s Materials meet Life Research Focus Area, kicked off the Technology Briefing by presenting an overview of nano safety research at the institution. Empa has been, and continues to be, involved in several EU research projects and has also contributed to various information brochures on the subject of nanomaterials. One outcome of this effort is the website http://www.nanopartikel.info and another is an information brochure for the textile industry and its suppliers. The latter could act as a template for other branches of industry and is available as a PDF download at http://www.empa.ch/nanosafetextiles.

Next Claudia Som briefly introduced the NanoHouse project, for which she acted as Empa coordinator. This project, which is financially supported through the EU’s 7th Research Framework Program, began in 2010 with the aim of investigating possible health effects caused by nanoparticles in building materials and houses. Various aspects of the research program included rubbing tests on model façades, attempts to wash out nanoparticles from surface coatings and an analysis of the biological effects on humans and the environment.

Many laboratory studies but only a few products

Tina Kuenniger, an Empa expert on the protection of wood surfaces against weathering, explained how nanoparticles work in paint. Some paints containing silicon dioxide are water repellent, easy to clean and scratch resistant. Nano titanium-dioxide has photocatalytic properties and can decompose air pollutants. Nano titanium-dioxide, along with nano zinc-oxide and nano-iron oxide, can be used to provide UV protection and, depending on the size of the particles used, also to protect against infrared radiation, i.e. heat. Similarly, nanoparticles can protect against attack by blue stain fungus and algae. Whilst many laboratory studies have confirmed the effectiveness of nanoparticles, in practice one question remains open: how much of the nanomaterial does one have to mix with the paint to ensure that it functions as expected? For this reason only a few products for external façades containing nano-materials are available on the market to date. The greatest opportunity nanoparticles offer lies in the combination of various functional properties, for example scratch resistance and easy (or self) cleaning characteristics.

Astonishingly little is released to the environment

Bernd Nowack, head of Empa’s Environmental Risk Assessment and Management group, then presented the results of the investigations into how much nanomaterial is set free from façades. The release rate is generally very low – only 1 to 2% of the nanoparticles find their way into the environment. And in most cases they are released not as nanoparticles but bound to large paint particles, which significantly reduces their nano-scale effects. “We were very surprised at how few nanoparticles were actually set free”, Nowack admitted. The researchers had expected that the catalytically active nanoparticles would also attack the paint surrounding them, leading to more frequent release.

Jean–Pierre Kaiser showed by means of his toxicological studies that paints containing nanoparticles have the same effect on the behaviour of cells from the gastrointestinal tract and immune system as do similar paints which do not contain nanoparticles. The Empa researcher does not therefore expect that these nanoparticle-containing paints will represent a new, acute health risk. However, the investigations did at the same time show that nanoparticles are absorbed by the cells. Whether this accumulation of nanoparticles in the cells might lead to longer-term effects cannot yet be definitively determined.

Empa environmental scientist Roland Hischier made a plea for a reasonable balance in the assessment of the possible environmental damage. For a house with an assumed lifetime of eighty years, painting the façade with nanomaterial based paint would be more economic if this lasted for 30% longer than conventional coatings. Then, over the lifetime of the house, one would have to repaint the façade one less time, avoiding all the environmental effects caused by manufacturing the paint and disposing of the leftover material.

This theory remains somewhat controversial, however –houses are frequently repainted for aesthetic reasons and not because a new coating is strictly necessary. In this case the advantage offered by the longer lifetime of nanoparticle-based coatings becomes irrelevant.

A lack of awareness in industry

Next Ingrid Hincapie, a risk researcher on the Empa staff, reported on the results of her industrial survey. Many companies expected paint containing nanoparticles to have a longer lifetime than conventional paint. Some expected it to be easy to handle, for example because it dries faster. But exactly how one correctly disposes of leftover paint containing nanoparticles is something that only a handful of respondents knew.

Peter Seehafer of the Painter’s and Plasterer’s Association, gave the view from the sharp end, where quite simply the customer is king, and sometimes demands the latest in paint technology. “Our professional association needs more information, so that we can take up a clear position with respect to our customers and our employees”, demanded Seehafer.

Climate and Society: Assessing the Use of Historical Datasets
Today’s green investment is tomorrow’s emission reduction — models must grasp this
X-ray fingerprints of novel photocathode materials: A new route for theory and experiment to join ha...
Playing ball with the Haber–Bosch process