Researchers from Washington University in St. Louis describe a novel technique to fabricate perovskite solar cells, which have tremendous potential in the future designs of photovoltaic technology. 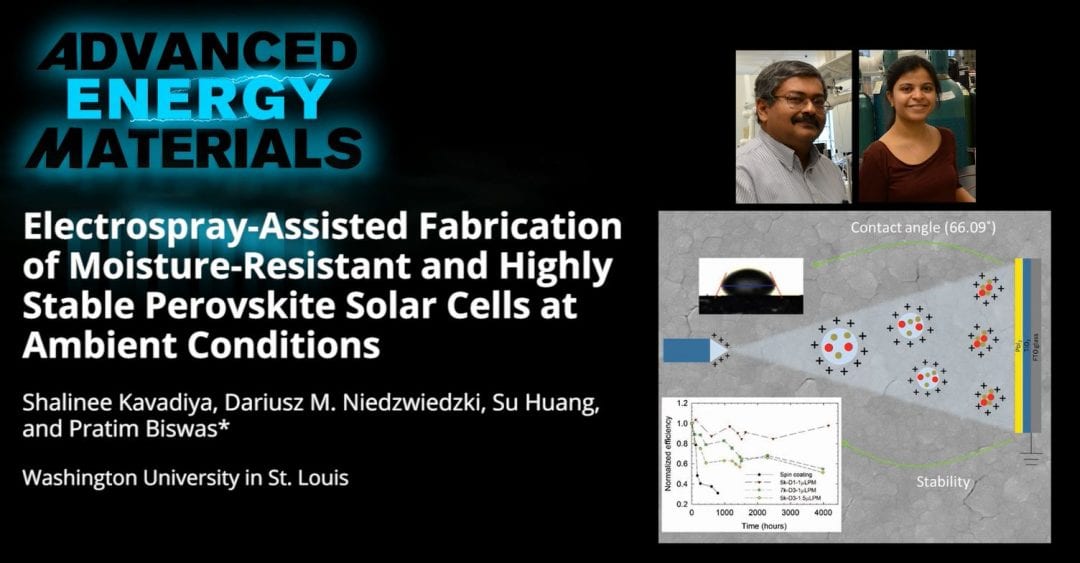 As we continue to decrease our reliance on fossil fuels, renewable energy sources such as solar and wind energy are becoming increasingly vital. Solar energy can be converted into electricity on a large scale by panels, which can be assembled in solar parks, placed on rooftops, or integrated into building architecture to power homes and businesses across the globe.  Designs of solar photovoltaic devices based on perovskite films have been found to be promising, however they are plagued by poor stability of the films.

In a recent article in Advanced Energy Materials, Professor Pratim Biswas and doctoral student Shalinee Kavadiya from Washington University in St. Louis describe a novel technique to fabricate perovskite solar cells, which have tremendous potential in the future designs of photovoltaic technology. Their fabrication approach is based on an aerosol-based technique called electrospray deposition.

In the first step, PbI2 is deposited onto a TiO2-coated, fluorine-doped tin oxide glass substrate by spin coating to form a nearly uniform, yellow coating. Next, a solution of methyl ammonium iodide (MAI) is electrosprayed by pumping it through a capillary needle at a high voltage and generating monodispersed charged droplets in Taylor cone-jet mode. The charged droplets travel in the electric field toward the grounded substrate and the solvent from these droplets evaporates before reaching the substrate. The dry MAI nanoparticles then react with the PbI2 layer to form the dark brown colored perovskite. The perovskite formation can be achieved in 40 minutes with optimized MAI concentration, flow rate, and substrate-to-needle distance.

The authors found that controlling the perovskite formation reaction using electrospray deposition can provide a uniform, smooth perovskite surface morphology, which prevents moisture absorption under ambient conditions, greatly enhancing the stability of the device. A rough surface, which arises if a spin-coating method is used, is more hydrophilic because the contact angle with the water droplet is lower. To test the stability, the perovskite film was intentionally sprayed with water and heated to 100 °C; this caused it to degrade to PbI2. However, the crystalline structure of the perovskite film reformed, changing from yellow back to dark brown. The XRD spectra of the film before and after exposure to water are identical, suggesting that a self-healing mechanism takes place.