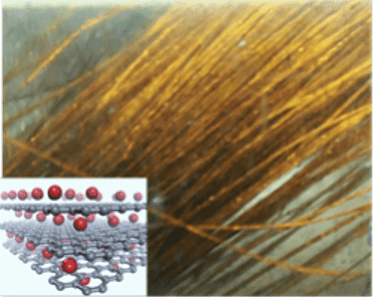 Since their first creation in 2011, graphene fibers (GFs) have demonstrated high potential in performance and many attractive possible applications. These fibers could be used in multi-functional textiles, including electrical conductors, fiber-shaped solar cells, flexible supercapacitors, smart sensors and actuators, to name but a few. To meet this end, many advances were made towards those applications, especially on the electrical conductivity properties. However, the best conductive performance of GF ever achieved is still lower than the benchmark metallic counterpart and the high expectation of single-layer graphene. A challenge that the researchers from Zhejiang University and Zhejiang Sci-Tech University, Hangzhou P. R. China, recently overcome. 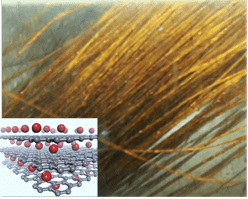 Photograph of graphene fibers(GF)-K filaments with golden-yellow color with a schematic illustration of the basic unit in the doped GF.

Previously, chemical doping was used to improve the conductivity of carbonaceous materials, from traditional CFs to CNT fibers. Liu et al produced chemically doped GFs with excellent electrical conductivity via chemical doping strategy. The electrical conductivities reach up to 0.77~2.24 ×107 S.m-1, which are the highest values among all the reported GFs. The combination of lightness, excellent electrical conductivity, and easy scalability gives GFs remarkable potential in the field of electrical engineering and smart wearable devices as a candidate to replace metals. This strategy of post-doping in GFs will be helpful in the fabrication of other graphene macroscopic materials, such as films, papers and aerogels with advanced purposes and promising exciting results.