A new high strength soft actuator which can be used in quasi-static applications has been developed. 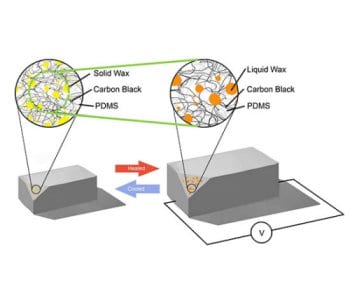 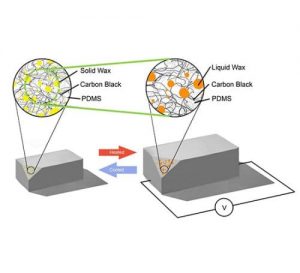 J. I. Lipton and his team from MIT have developed a new high strength soft actuator which can be used in quasi-static applications that need these high forces. These new actuators, called Electrically Actuated Hydraulic Solids (EAHS) can generate upwards of 4500N of force and can move up to 4% strain why only using a 12 volts and 1 amp of electricity. EAHS consist of thousands of wax cells incased in a slightly conductive elastomer. Each cell acts as a miniature wax motor, converting current into heat, heat into pressure and pressure into movement. This decentralized structure allows them to be cut with a knife and still function. Made of simply PDMS, carbon black, and paraffin, these items are cheap to produce and integrate. They can be made and shaped via casting, 3D printing, or cutting processes. They can be hooked up to electrical systems by simply inserting wires into the conductive elastomer framework. Their sealed PDMS structure eliminates the needs to sliding seals in a linear actuator.