A fully edible supercapacitor has been developed from food-grade materials by researchers in the USA. 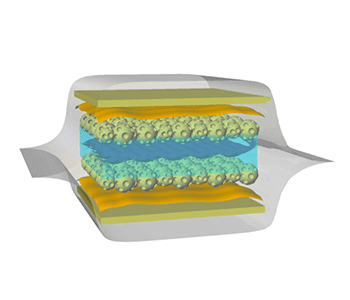 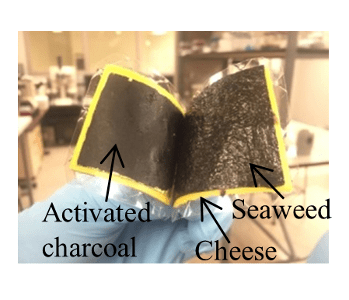 The edible supercapacitor consists of packaging, current collector, electrodes, electrolyte, and separator. Activated charcoal from dietary supplements was bound with egg whites and used for the capacitor electrodes, with edible gold leaf as the current collector. Both these have high electrical conductivity and chemical stability.  An electrolyte sports drink, with high concentrations of sodium, potassium, and citrate, provided an excellent capacitor electrolyte, with high ionic conductivity. A sheet of seaweed separated the two electrodes, with its multi-layer structure allowing the electrolyte liquide and ions to permeate though, while separating the electrodes from contact. The complete capacitor was sealed inside gelatin sheets, with cheese slices used to segregate the electrolye from the gelatin, prevening degradation from electrolyte absorption.

The edible supercapacitor shows good performance, retaining 92% of capacitance after 1000 cycles with low leakage current. As demonstration of the supercapacitor,  three supercapacitor units were set up inside simulated gastric fluid, and used to power an LED. The  device lasted three minutes, before “digestion”.  By working on surface modification and crosslinking of gelatin, the researcher hope to significantly improve the longevity of gelatin in the digestive fluids.  The device was also used to power an endoscope, and kill bacteria through electric current. The researchers also developed a wireless charging system, which could be used to charge the device while inside a human body.

Several other different food materials were also investigated for suitable application in edible electronics, including monosodium glutamate as an additive to enhance electrolyte ion density, carboxymethly cellulose as a binder, vegetable and energy drinks as liquid electrolytes, barbeque sauce, jello, and cheese as gel electrolytes, and gummy candy as the packaging material. Due to the vast array of foodstuffs with potential in edible electronics, it should be possible to optimize passage of the edible devices through the human digestive system.