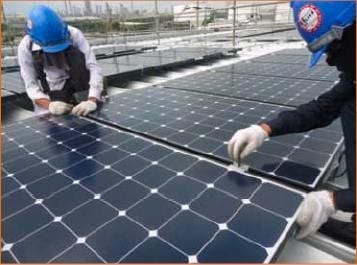 The solar panel system was installed on the roof of Dow’s Map Ta Phut, Thailand operation in the past few weeks.

The Dow Chemical Company continues to take steps to harness the power of the sun – this time to improve the energy efficiency of its manufacturing operations in Map Ta Phut, Thailand.

Dow has reported that it has installed a high-efficiency solar system on the roof of the plant that makes ENLIGHT Polyolefin Encapsulant Films at that site. The installation is expected to generate approximately 100 kilowatts of electricity each year for about 25 years. This is expected to generate enough electricity during that time to offset 4 million pounds of fossil fuels, or the equivalent of planting 35 acres of trees.

The Map Ta Phut site is Dow’s largest in the Asia-Pacific region, and is known as a center for science and technology in Thailand.Jirasak Singmaneechai, Thailand Country Manager for Dow, noted that the company has a deep commitment to good environmental practices and social responsibility in Thailand. “This step represents another good commitment to doing what is right for Dow and for the environment,” he said.

All told, Dow is tripling manufacturing capacity for ENLIGHT films in 2012 in order to meet demand for its use in both crystalline silicon and thin-film solar modules. Construction is also under way in Schkopau, Germany, the heart of Europe’s “solar valley.” That plant is expected to come on-stream in 2013. Dow also operates a plant in Findlay, Ohio, which was completed late in 2010.

Singmaneechai added, “We chose a SunPower high efficiency solar system for the roof of our Map Ta Phut facility because the technology is the most efficient on the market today, and offers the highest reliability with guaranteed performance.