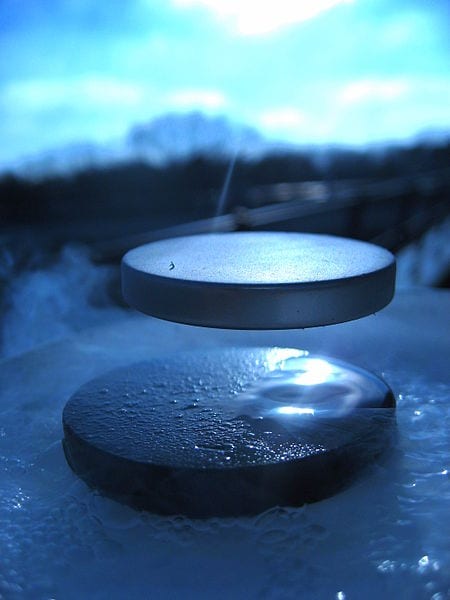 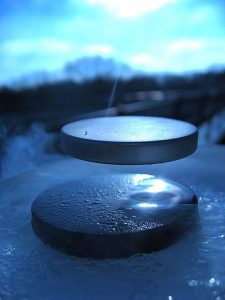 Levitation of a magnet on top of a cuprate superconductor YBa2Cu3O7 cooled at -196°C. This image is a file from Wikimedia Commons by Julien Bobroff and licensed under the Creative Commons Attribution-Share Alike 3.0 Unported license.

Superconductors are materials that, when cooled below a critical temperature, exhibit no electrical resistance and repel magnetic fields. The photograph is an example of the most popular images of superconductors: a magnet levitates in the air above a superconducting object (or vice versa). Superconductors – mostly cooled with liquid helium or liquid nitrogen – are already used in several high-tech devices. Many more applications could be envisioned pending one important milestone: superconductivity at room temperature that does not rely on such expensive and elaborate cooling systems.

What exactly causes the graphite to become superconductive after treatment with water (and less superconductive after subsequent annealing in vacuum) is yet to be studied in detail. The scientists suspect that the water treatment dopes parts of the grain surface with hydrogen, an element that can also induce magnetic ordering in graphite. To support their claim, the researchers exposed the untreated graphite powder to hydrogen plasma; and indeed, the resulting powder showed the same characteristics as the water-treated samples. It may be possible that water, hydrogen, or oxygen molecules can enter into the graphite lattice and trigger superconductivity – but this will be subject to future studies.

Overall, the scientist note that, although the superconducting yield is small and the phenomenon not yet fully understood, their experiments show that superconductivity at room temperature appears to be attainable at last! Their method may finally open the door to a new generation of superconducting devices with exciting benefits for us all.