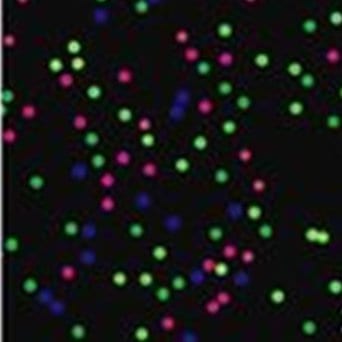 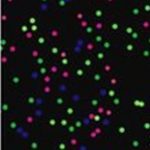 The development of therapeutic treatments, biological detection, and disease diagnosis all rely on real-time information delivered from multiple targets in order to determine what is going on in a particular biosystem. Therefore, multiplexed signaling, where many signals are combined into a single transmission circuit or channel, is essential. The current standard for multiplexed assaying is the planar array structure, which offers high density screening. In recent years, using encoded microbeads in multiplexed arrays has become an attractive alternative to the planar microarrays because bead bioassays offer multiplexing of both probes and samples, and have fewer limitations related to binding.

These microbeads, or microbarcodes, are encoded via embedding or attaching quantum dots or organic dye molecules into or on their external surfaces. A few limitations are present with using these materials, such as the low spectral resolution of dyes that do not interfere with commonly used biological labels. The advantages of photostability and narrow emission ranges with quantum dots are hampered by their toxicity. With increasing amounts of both, their compatibility with the solvent used to swell the microbeads decreases.

Multiplexed detection also requires the incorporation of a reporter dye, meaning that the wavelengths at which this dye emits is not available for encoding. This emission profile overlaps with the excitation wavelengths of the organic dyes and quantum dots, which are excited at wavelengths in the UV or visible region. In some materials, the wavelength of the emitted light is shorter than that of the excitation. Scientists from Fudan University and UC Santa Barbara embedded their microbeads with nanocrystals that exhibit upconversion, a process where the wavelength of the light emitted is shorter than that of the light generating the excitation. Their upconversion nanocrystals, comprised of rare earth doped oxides, are excited in the infrared range and emit in the visible region, which does not optically interfere with the organic dyes used. By tuning the composition and doping level, they created nanocrystals each with unique spectral characteristics, allowing for a large optical range for coding of the microspheres. The scientists observed successful coding of signals from a DNA hybridization sequence, showing the ability of these nanocrystals for multiplexed signaling and nucleic acid encoding. This shows the potential of this barcode material for rapid and sensitive analysis of other agents and nucleic acids, opening up a wide range of applications in bioanalysis.