Plastic strain engineering to analyze the effect of dislocation space charges on electrical and oxygen diffusion properties in SrTiO3 as a model oxide. 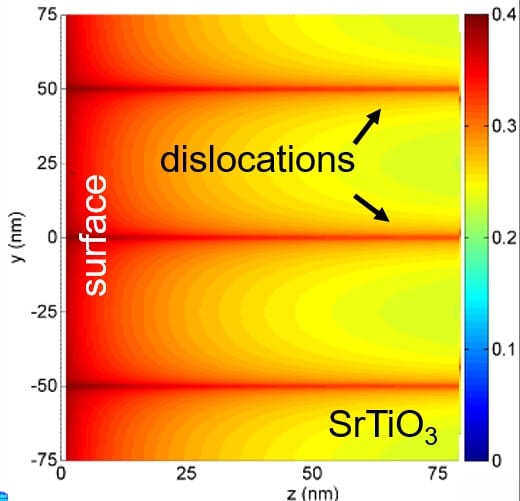 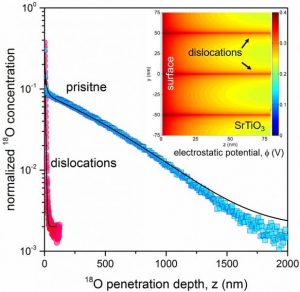 Oxides are abundant and useful for diverse applications, for example, they serve as catalysts, separation membranes, sensors, electrochemical energy conversion and storage devices, and as electronic and memory devices. The performance of these technologies rely on the type, abundance and transport properties of the electronic and ionic defects in the used oxides.

By combining electrical and chemical tracer diffusion experiments with computational modeling, Yildiz, Tuller and Maier from MIT and Max Planck Institute for Solid State Research reveal in their collaborative work published in Advanced Functional Materials that dislocations alter the equilibrium concentration and distribution of electronic and ionic defects significantly for SrTiO3 as a model system of technological importance. While the dislocation core is confined to sub-nanometer, the excess charge at the core results in electrostatic fields that extend tens to hundreds of nanometers in SrTiO3. The latter alters the population and kinetics of charged defects by orders of magnitude. Evidently, controlling dislocation density in SrTiO3 and similar oxides can pave the way for a new approach for tuning electrical properties of functional oxides.