Recently, negative capacitance was first demonstrated in epitaxial ferroelectric lead zirconate titanate, proving that a direct measurement of the phenomenon is possible. 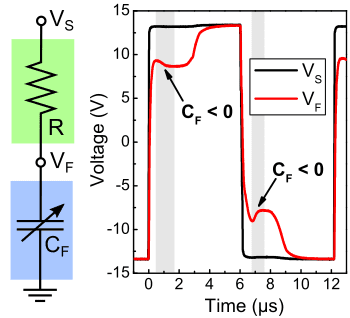 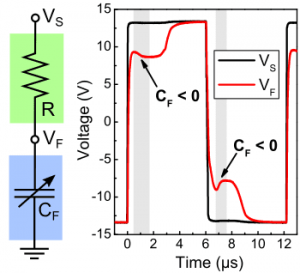 Transistors, the building blocks of integrated circuits, have become exponentially smaller, faster, cheaper and more energy-efficient over the past 50 years. This trend enabled billions of people today to have a computer in their pocket, where each one has more processing power than all computers that existed on the planet half a century ago combined. However, the further pursuit of this remarkable trend is limited by an increase in power dissipation, which is strongly related to a fundamental lower limit of how much voltage is needed to switch a transistor on and off. Reducing this voltage is one of the most prominent problems in nanoelectronic devices research today.

Ferroelectric materials are suited to address this problem, due to the negative differential capacitance connected to the ferroelectric effect: When the voltage applied to a negative capacitor is increased, it will be discharged instead of charged, and vice versa. While this negative capacitance by itself is unstable, a series combination with the positive semiconductor capacitance in a transistor can stabilize it. As a result, the voltage swing necessary to switch the transistor between on and off is reduced, thus lowering the overall power consumption of the integrated circuit.

Recently, negative capacitance was first demonstrated in epitaxial ferroelectric lead zirconate titanate, proving that a direct measurement of the phenomenon is possible. However, such ferroelectrics are not suited for application in transistors due to their incompatibility with semiconductor fabrication processes. Researchers at NaMLab in Germany in collaboration with the University of California, Berkeley have now, for the first time, directly measured negative capacitance in doped HfO2 thin films by applying short voltage pulses to a series connection of a resistor and a ferroelectric HfO2 capacitor.