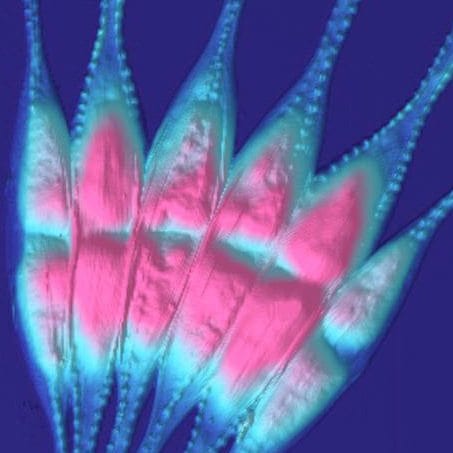 Diatoms are an algae in which the cells are encased in a silicate shell.  The complex and often beautiful structure of diatom shells have fascinated scientists for well over a century.  As microscopic techniques develop, biologists are able to  study the structure of diatom shells in great detail at the nanoscale.  These studies receive considerable interest from materials scientists, and indeed more materials scientists are studying nature’s nanostructures with the aim of reproducing and manipulating natural nanofabrication and repair mechanisms; if established, such technology would be extremely powerful. 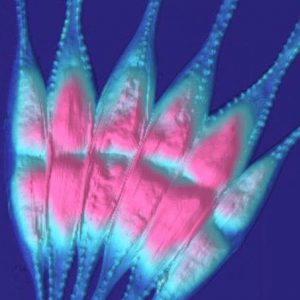 Now a collaboration between Ruđer Bošković Institute in Croatia and Bruker Nano GmbH characterised the marine diatom Cylindrotheca closterium (pictured above) using Peak Force Microscopy, a recently developed imagine mode of Atomic Force Microscopy.  The team were able to map the properties of the diatom shell in high resolution.  For example, the images below show maps elasticity and deformation (upper and lower, respectively).

The diatoms themselves could be immersed in seawater during the experiment, eschewing the need for complex sample preparation and the inevitable artefacts that could be introduced as a result. While the current study reveals much about the structure and functioning of marine diatoms, there is also much to be gained for materials scientists in this developing field of research.