Devin Swiner: “At the heart of what I do, I want my science to help people”

The up-and-coming analytical chemist talks social media, engaging the next generation of women in STEM, and her journey through a Ph.D. 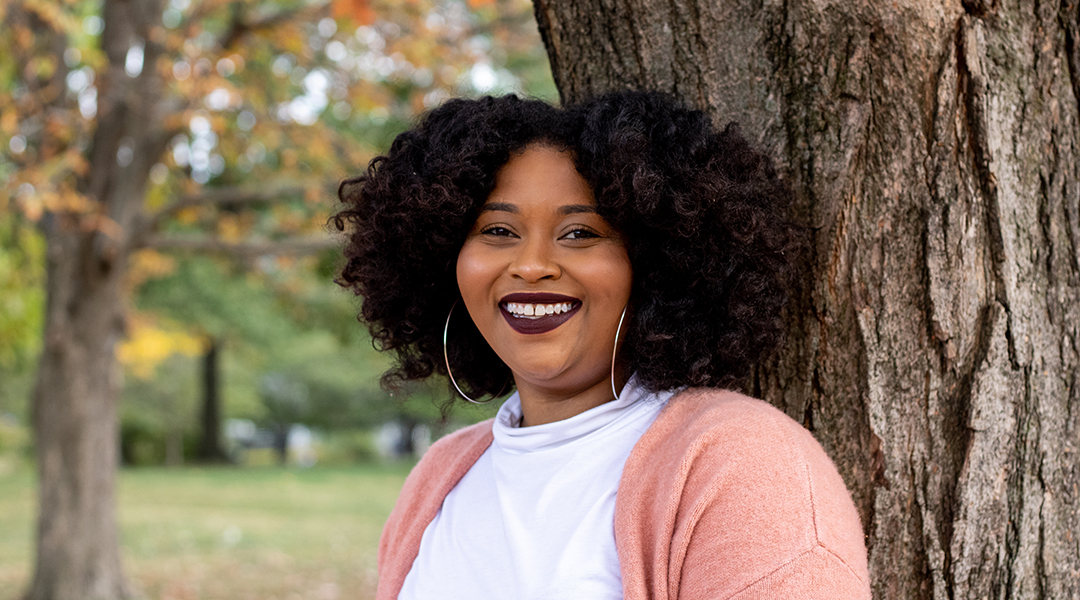 “I think of chemistry as a puzzle — each experiment is one more piece, and the more experiments I do, the more I can uncover and add something new to the field.”

A self-proclaimed lab rat, Devin Swiner is a Ph.D. candidate at Ohio State University waiting to defend next month (who else remembers those jitters?). “I’m a huge ball of emotions but I think I’m ready,” she said. “I’m proud of my research and do feel like an independent researcher, but it’s still nerve-wracking.”

Her work with Professor Abraham Badu-Tawiah is focused on the development of new ionization sources in mass spectrometry for sample analysis and clinical diagnosis. “We wanted to make sure that the science we’re doing can be used to help people that may not have access to great healthcare or a centralized laboratory,” she said.

This has involved creating easy-to-use high throughput methods using cellulose-based materials — essentially cotton threads found in sewing kits from fabric stores — to quickly and accurately detect lethal toxins such as ricin or biomarkers in the blood such as fatty acids to detect type 2 diabetes or heart disease. Sample collection is achieved by simply dipping the thread directly into a blood sample then, after drying, it can be analyzed. “The point,” said Swiner, “is to make this technique available to anyone, even if they don’t have a degree in chemistry.”

This led to a collaboration with Children’s Nationwide Hospital in which Swiner and her co-workers have been developing a sweat collection patch to quickly and accurately detect biomarkers associated with cystic fibrosis. This sampling technique is highly important as screening for such diseases in new born babies can be challenging as they cannot provide large amounts of blood or other biological fluids for testing. But with this new technique, a single piece of thread can now be used to analyze the metabolites in their sweat. It was this work that won her the 2020 Next Generation Innovator of the Year Award from Ohio State.

Her path into chemistry seems to have been set from childhood where she says she was always the “why child” and actually began with an interest in forensics. “My grandad was a detective, and I loved all the basic shows like CSI, NCIS, and Law and Order,” she said laughing. “I always liked the person in the lab doing the analysis and I fell in love with forensics that way. Then in undergrad, I quickly realized, ‘Oh this isn’t one person’s job, this is a team of people!’

“But I’ve always been an analytical thinker, I’m always trying to dig a little deeper and it was a natural progression for me [into analytical sciences] because that’s how I naturally think.”

Outside of her research, Swiner is a powerful advocate for Black and non-Black chemistry students of color. “I know what it feels like to be in a classroom in science or STEM in general and [not be represented]. I didn’t see another black woman that was a chemist until I got to undergrad, and even then, in my class at Pitt [the University of Pittsburgh], in the class of 2016, there were only three black people and I was the only black woman,” she said.

“I would not be here without my mentors they played an integral role in my journey, both formal and informal. I have these three amazing women who helped me get to this point and because of them, I always knew I wanted to give that back,” she said. “It shouldn’t take a happenstance encounter to see someone who looks like you in your field. College is way too late for this, which is why a lot of outreach I’ve been doing has been for high school and middle school students, to nurture their interest in science and pay it forward.”

This also means making science more accessible by helping people to better engage with it and understand it. “When I do science communication, I am partial to using GIFs or analogies to make things more tangible for people. I’ll never forget, I did a thread [during an account take over for @realscientists] for time of flight (TOF) mass spec. I was explaining how the mass analyzer works and the analogy that I used for reflectron TOF was like giving a set of twins candy: one twin might have more energy than the other, but you give them both something to do and then they’ll both go to sleep at the same time. That’s exactly how a TOF reflectron works: you have ions with the same m/z traveling, they have to turn around and hit the detector at the same time.”

Another of Swiner’s passion projects has been her involvement with Macscientists, a blog she helped found with Soyo Awosika-Olumo, Carrie Alexander, and Courtney Young. Each of the four members comes from a different area in STEM and can share different experiences, which is fundamental to their mission.

“All of us have the same goal, which is to show the next generation of women in STEM that there are people that look like them in these fields that are excelling,” they write on their website. “We want to be a walking example and give young girls an insight to how vast STEM is and is growing to be. By sharing our candid accounts on lessons we’ve learned throughout our life and career, we hope that we can provide encouragement, mentorship, and guidance to young girls and women as they aspire to go out into the world and achieve their dreams and choose STEM.”

Swiner’s advocacy work in promoting the visibility of Black scientists in STEM has also led her into the realm of science communication where as “Devin the Chemist” she has built a following on Twitter, which she says has helped her to create and participate in a community by simply being herself.

“Using twitter to share my voice and my experiences has always been my intention with social media,” she said. “I don’t do it necessarily for my own visibility, but to raise awareness to different issues and to amplify and advance people that are doing really cool things.”

Visibility and community are incredibly important but when it comes to some diversity and inclusion initiatives, the work and responsibility can be misplaced. “A lot of times, people are like, ‘You’re marginalized, you know what’s going on so you can help us dismantle it.’ But they forget that we didn’t do this to ourselves. I am personally selective with what I sign onto.

“What’s important is to make sure these systems are self-sustaining without people of color running them. What I need to know is that you can recognize when someone is giving me a microaggression, that something is wrong. We need to be mindful of everyone’s experience and know there is no bandaid fix for a lot of our experiences and being able to account for that is important for non-marginalized folks more than marginalized folks because we live it every day.”

Swiner is also one of the masterminds behind #BlackinChem — along with fellow organizers Ayanna Jones, Ashley Walker, Kathleen Muloma Rink, Natérica das Neves Rodrigues Lopes, Samantha Theresa Mensah, and Heidi Nelson-Quillin— a hashtag used to raise the profiles of Black chemists and connect them within social media “to help them feel like they do belong and can find a community”.

“For me #BlackinChem was always about elevating Black chemists and amplifying what we’re doing and sharing our experiences,” said Swiner. The team held a virtual #BlackinChem event week last August, which exploded on Twitter and garnered significant global attention.

“I could not have imagined it would blow up like it did,” said Swiner in an interview with the RSC. “I had people contact me from Australia, India, the UK, literally everywhere. We got a lot of celebrity endorsements as well. [Rapper] MC Hammer was tweeting about the week every single day and so was Michelle Williams from Destiny’s Child. [Actor] Michael B. Jordan also tweeted us about the week. It definitely exceeded all my expectations.”

Though she is still waiting to defend her Ph.D., Swiner is already making a name for herself in her field and it’ll be exciting to watch where her career takes her — in fact, she tells us that she’s recently accepted a senior scientist position at Merck, which has been a dream come true. “One of the things I realized was that at the heart of what I do, I want my science to help people,” she said.

Computers that mimic memory and learning in the brain
Beyond Haber-Bosch: Non-Equilibrium Photocatalysis
Antibodies active against SARS-CoV-2 found in 20-year-old library
Does responsible climate leadership include research into solar geoengineering?