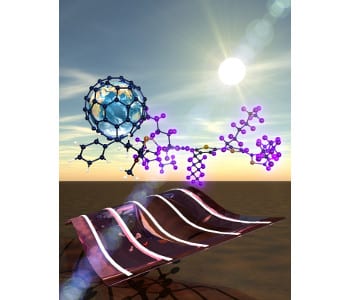 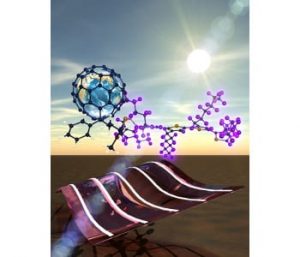 Conceptual drawing shows a flexible organic photovoltaic made from an acceptor of PCBM (buckyball with earth) and the donor of deuterated conducting polymer. The polymer blend in the device (bottom) will harvest the sunlight to generate electrical power. (carbon:blue; sulfur: yellow; hydrogen: white; deuterium: purple). Image: Christopher Rouleau, CNMS.

Photovoltaic spray paint could coat the windows and walls of the future if scientists are successful in developing low-cost, flexible solar cells based on organic polymers. Scientists at the Department of Energy’s Oak Ridge National Laboratory recently discovered an unanticipated factor in the performance of polymer-based solar devices that gives new insight on how these materials form and function.

“One of the dreams is to bring home some polymer paint from the hardware store, spray it on a window and make your own solar cell because it self-orders into a structure that can generate electricity,” ORNL’s David Geohegan said. “But right now there are many unknown things that happen when you spray it down and it dries. Changing the electrical property of a polymer also changes its structure when it dries, so understanding this process is one of our big science mysteries.”

When ORNL scientists Kai Xiao and Kunlun Hong analyzed neutron scattering data obtained at the lab’s Spallation Neutron Source to measure the structure of seemingly identical polymer-based solar devices, they stumbled upon a new piece to the scientific solar puzzle.

The key to their finding was deuterium, also known as “heavy hydrogen,” which is commonly used in neutron scattering analysis. Scientists use the isotope as a labeling tool, replacing hydrogen with deuterium in organic samples because deuterium’s extra neutron helps reveal soft materials’ structure.

“Normally scientists assume that the deuteration doesn’t change the electronic structure at all,” said Xiao, a materials scientist at ORNL’s Center for Nanophase Materials Sciences. “But when we used it to study conducting polymers in solar cells, the devices’ electronic performance changed significantly.”

To understand the mechanisms behind deuterium’s effects, the team turned to ORNL’s Bobby Sumpter and another lab strength — supercomputer simulation. Modeling the system through quantum calculations helped the researchers determine that heavy hydrogen changes the molecules’ vibrations, which indirectly but significantly affects the material’s electronic properties.

In the case of the team’s organic solar cells, deuteration turns out to have a negative impact, decreasing the devices’ electrical efficiency. But the ORNL researchers note that other organic electronics such as organic spintronics or light emitting diodes (OLEDs) could benefit from deuterium’s effects.

“Overall, deuterating polymers helps us understand how energy flows in organic electronics so we can improve and optimize them in the future,” Xiao said. “It’s opening our eyes to the fact there is an impact.”

The researchers’ unexpected results could also inform future neutron studies in the organic electronics field. Xiao notes, for instance, that the precise position of deuterium in the polymer chain determines whether the overall electrical properties will be altered.

“We need to carefully control the deuteration of polymers for neutron experiments,” Xiao said. “Adding deuterium to the polymer’s side chain doesn’t affect the neutron results, but deuterating the main backbone of the polymer chain does change the structure of the films.”

The team’s study, supported by the Department of Energy’s Office of Science, is published in Nature Communications. The researchers plan to continue integrating their polymer synthesis and neutron research through a new project to study polymer solutions as they dry.