A new type of probe for detecting highly toxic cyanide anions has been developed by Professor F. Li and co-workers at Fudan University, China. 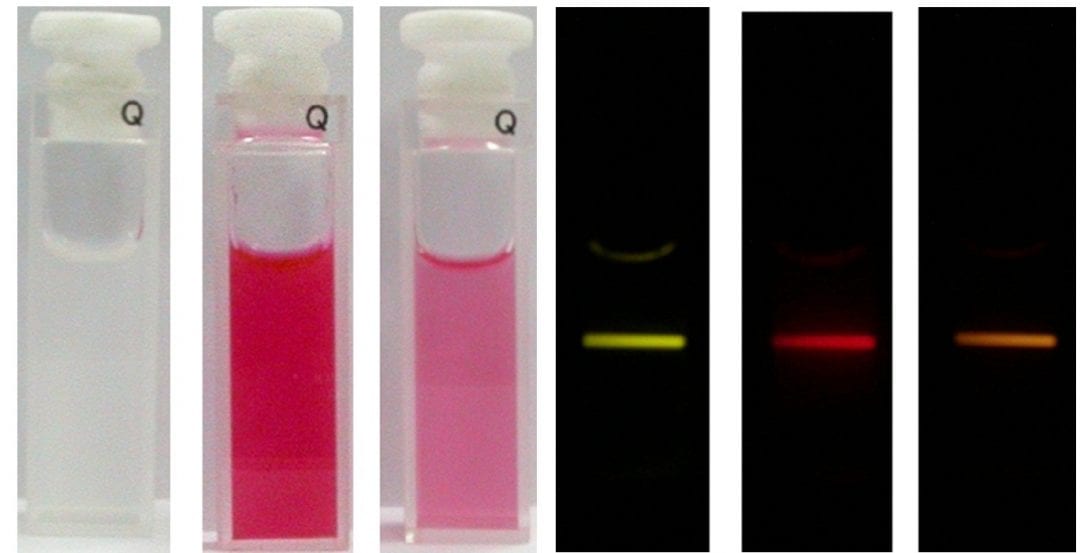 A great deal of effort has been invested in developing probes towards cyanide anions (CN–) using colorimetric and fluorometric methods. However, most of the current optical probes require the use of organic solvents, or at least a mixture of organic solvents and water, which is not environment friendly.

Pictures of the optical and photoluminescent properties of the probes developed by Professor Li and co-workers.

Now, Fuyou Li and colleagues, at FudanUniversity, P. R. China, have developed a smart strategy for upconversion luminescence detection of CN– in pure water for the first time. They coated amphiphilic block-polymer onto the surface of hydrophobic oleic acid-coated NaYF4: 20%Yb, 2%Ho upconversion nanophosphors (UCNPs) to fabricate a hydrophilic nanostructure. CN–-reactive iridium(III) complex ([(ppy)2Ir(dmpp)]PF6) was then loaded to form the hybrid material as the nanoprobe.

The detecting mechanism of this nanoprobe is based on a luminescent resonance energy transfer (LRET) process by choosing the UCNPs as energy donor and CN–-responsive complexes as energy accepter. Detection limit of the nanoprobe in pure water is 37.6 μM. The method is general and can be extended to other hydrophobic probes for the applications in hydrophilic surroundings.

Smart clothes go green: The next revolution in textile electronics
Green solvents for polymer dissolution
The Success of Plasma for Microfabrication in Electronics
War on plastic is distracting from more urgent threats to environment, experts warn