Designing and Processing Biodegradable Materials: On the Crystallization Behavior of Poly(lactide)s 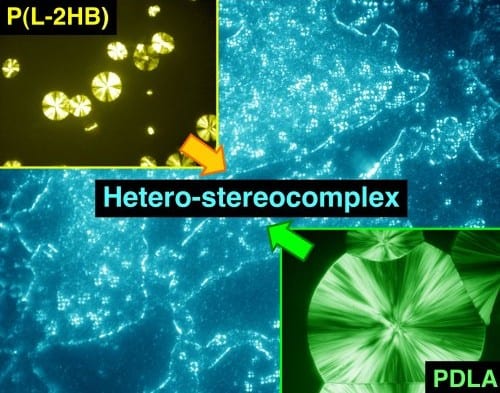 Stereocomplexes are formed between isotactic and syndiotactic polymers and between isotactic (S)- and (R)-configured optical active polymers due to the strong interaction between the chains with different stereoregularities. Well-known examples for the former are stereoregular vinyl polymers such as poly(methyl methacrylate), whereas those for the latter are optically active polyesters such as substituted poly(propiolactone)s and substituted and unsubstituted polylactides [i.e., poly(lactic acid)s] and optically active polyamides such as poly(hexamethylene di-O-methyl tartaramide).

On the other hand, stereocomplexes are known to be formed between isotactic (S)- and (R)-configured optical active polymers with different side chains. These complexes are called hetero-stereocomplexes. The reported examples are limited to two pairs of polymers: isotactic poly(methyl methacrylate) and syndiotactic poly(isobutyl methacrylate), isotactic (S)- and (R)-polyketones ((+)-poly(propylene-carbon monoxide) and (-)-poly(1-butene-carbon monoxide)).

In new research, Hideto Tsuji et al. (Toyohashi University of Technology) report a novel hetero-stereocomplex formation for isotactic (S)- and (R)-configured biodegradable polyesters with different side groups: poly(L-2-hydroxybutyrate) and poly(D-lactide), i.e., poly(D-lactic acid). The effects of crystallization temperature and polymer blending ratio on the hetero-stereocomplex formation are studied in detail.

The information obtained here will facilitate designing and processing biodegradable materials of poly(L-2-hydroxybutyrate/poly(D-lactide) blends with s wide varieties of physical and hydrolytic degradation properties for aiming at biomedical, pharmaceutical, and environmental applications.

Not a Stretch: Flexible Hydrogels with Structural Color
Living Well With Plastics: The Politics of the Plastics Crisis
Metal–Hydrogel Hybrids
Rethinking plastics production and recycling