A fascinating approach for utilizing the chemical energy contained in the carbon–hydrogen bonds of methane without the co-production of carbon dioxide in the combustion process is discussed. 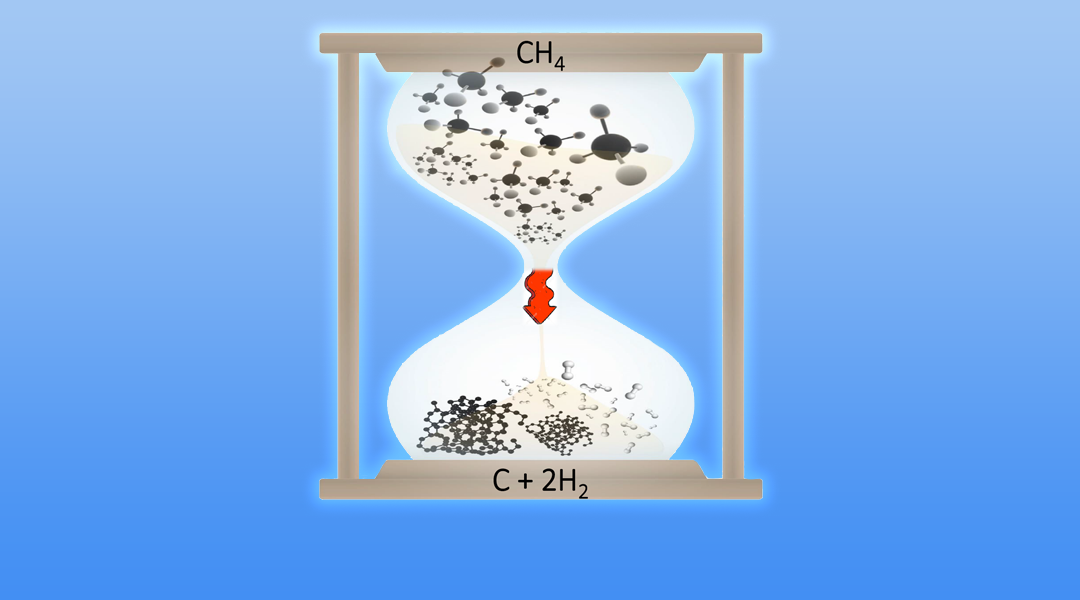 A fascinating approach for utilizing the chemical energy contained in the carbon–hydrogen bonds of methane without the co-production of CO2 in the combustion process, described by the reaction equation:

is through pyrolysis, namely the thermal treatment of methane in the absence of oxygen, described by the reaction equation: 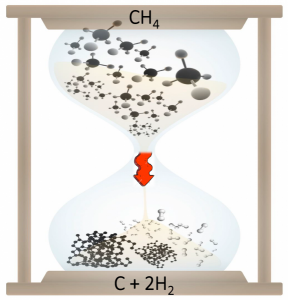 It’s time to decarbonise methane into a fuel by converting it to solid carbon and gaseous hydrogen without producing carbon dioxide. Artwork courtesy of Chenxi Qian.

The product of this pyrolysis is solid carbon and gaseous hydrogen but no CO2.

One of the ways envisioned for engineering methane pyrolysis on an industrial scale is inspired by the iron ore blast furnace. In this process, iron ore, coke and limestone are fed into the top of the furnace and molten iron and slag so produced sink and are separated at the bottom of the furnace.

A similar processing principle has been proposed for methane pyrolysis, whereby methane is fed into the bottom of a high temperature reactor filled with a molten metal such as Pb or a molten metal alloy NiBi at 1000°C. These metallic melts catalyze the formation of solid carbon and gaseous hydrogen. The carbon so formed floats to the top of the melt where it is siphoned off and transferred to a carbon storage tank. Of the co-produced hydrogen, 1/3 mole is used to heat the reactor, while the other 5/3 mole is cooled and stored for use as a fuel.

Based on the same processing principle, one can imagine a future zero-CO2 hybrid car powered by an on-board natural gas pyrolysis system, where the hydrogen product runs a hydrogen-oxygen fuel cell or combustion engine and the carbon product is collected in a holding tank that is periodically replaced when full.

A challenge in all-methane pyrolysis processes to make H2 is what to do with the vast amounts of carbon co-product? One possibility that has been considered is to make use of the reaction between the carbon and carbon dioxide at elevated temperatures around 1150°C:

to produce carbon monoxide for use as a synthon for making fuels and chemicals. This reaction has an associated endothermic penalty of DH = 172.6 kJ per mole, which could be provided by a renewable form of energy.

Another possible use for the carbon could be in a direct carbon–oxygen fuel cell, although the overall electrochemical reaction C + O2 → CO2 has the disadvantage of producing carbon dioxide. One other possibility is to control the morphology of the carbon produced from the methane pyrolysis reaction, for example in the form of carbon nanotubes, graphene, amorphous and graphitic carbons, and carbon fibers. These different forms of carbon could find numerous applications that exploit their unique electrical, optical, mechanical, chemical and surface properties.

It is worth noting that the energy intensity of the pyrolysis reaction to different forms of carbon could possibly be reduced by driving the decarbonisation photo-thermally. This would involve using a catalyst, such as Ni@SiO2, in which the nanostructured metallic component absorbs light strongly and broadly across the entire solar spectral wavelength range. Local heating of the metal catalyst would ensue to temperatures that would enable the conversion of methane to carbon and hydrogen.

If all else fails one can always put the carbon back into the earth from whence it came. It has been found that carbon black is useful as a fertilizer. Non-toxic to plants and filled with small pores, the carbon black allows air to diffuse into the soil which helps plant roots to breathe. Carbon black also has the ability to improve nutrient availability and retention. It is also chemically very stable compared to organic fertilizers and will not decompose over time to carbon dioxide, therefore offering the advantage of remaining in the soil with its beneficial qualities for hundreds of years.