Dark matter could be composed of primordial black holes

A new theory for the origin and nature of dark matter resolves some inconsistencies between cosmological predictions and astronomical data. 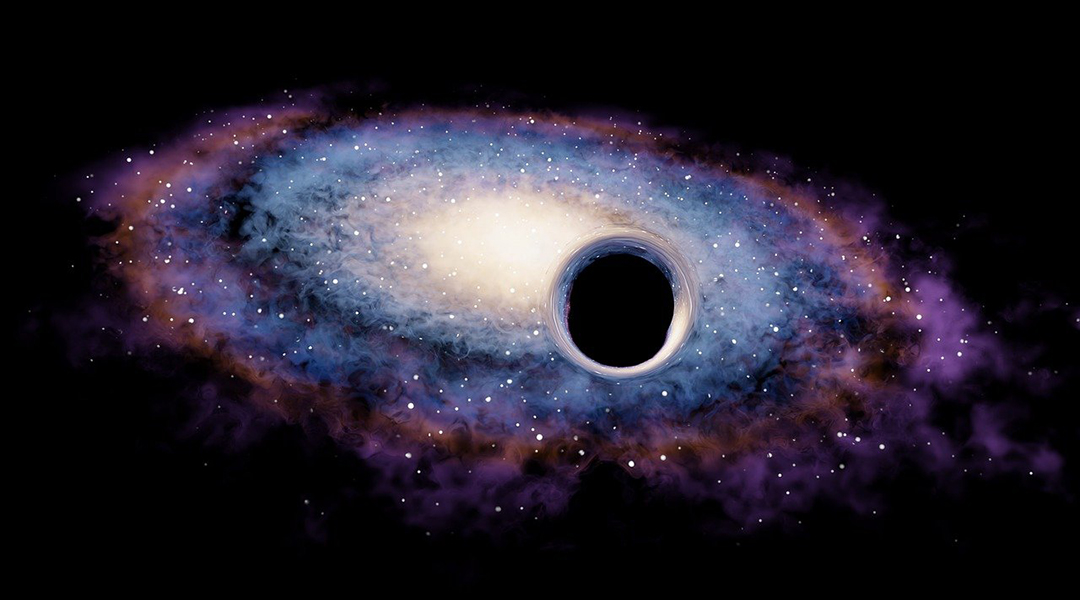 A new model to explain dark matter has just been proposed, where physicists now think that it could be composed of primordial black holes born during the first moments following the Big Bang. In the new model, the masses of black holes vary widely, which is in contrast to previous theories of dark matter which incorporate black holes. This is not only consistent with the observable evidence for the presence of dark matter, such as the inexplicably large rotation velocities of stars in some galaxies, but also mitigates some tension between our current understanding of the universe’s evolution and astronomical observations.

Physicists have proposed many theories with regards to the nature and origin of dark matter, an unknown form of matter thought to account for approximately 85% of the matter in the universe. For a long time, the most popular idea was that it consists of hypothetical weakly interacting massive particles or WIMPs. However, WIMPS have not yet been found in any Earth-based experiment, which has encouraged researchers to consider alternative candidates.

Interestingly, the observable signatures of primordial black holes are quite similar to those of dark matter consisting of WIMPS; an idea that was first proposed as a candidate for dark matter by Stephen Hawking in 1971. However, modern astronomical data significantly constrains this model. For example, detailed analysis of the trajectories of light emitted by distant stars, observations of supernova explosions, and modeling the evolution of dwarf galaxies essentially forbid that dark matter consists of black holes if their masses lie in a narrow range.

Predictions made by the new theory coincide with most conventional models of dark matter based on heavy weakly interacting particles when it comes to explaining how the universe works at its current age, but when the universe was younger than approximately 1 billion years old, things start to look quite different using this new approach.

The new model makes predictions about star formation and peculiarities of the cosmic background radiation spectrum that are at odds with that of the standard cosmological model. They differ most significantly at a time when the universe was less than 700 million years old, but existing observatories cannot provide reliable experimental data from that period.

The team of physicists from Spain, Italy, and the United States, led by Nico Cappelluti of the University of Miami, analyzed a model of dark matter consisting of primordial black holes with masses ranging from that of a heavy asteroid to hundreds of millions of solar masses.

According to their hypothesis, the masses of these first black hole must vary because they were born at the different stages of the early universe’s evolution, when temperature and pressure of matter differed drastically at different moments in time. When one particle type transformed into another during the universe’s expansion and cooling following the Big Bang (for example, formation of protons, neutrons, and pions from quarks), the pressure of this “primordial particle soup” dropped significantly, which led to regions of space with large energy densities to collapse into primordial black holes.

In their preprint study, which has not yet undergone peer review, the researchers claim that in their model, dark matter forms clusters more actively than in theories where dark matter is made of black holes with narrow mass ranges. This helps to avoid strict restrictions imposed by previous observations and computer simulations.

The new theory not only provides a plausible model for dark matter, but also resolves some of the inconsistencies between cosmological predictions and astronomical data. For one, the expected active clumping of dark matter is in agreement with the large number of small dark matter clusters, whose existence is indicated by astronomical observations.

The model also predicts the birth of supermassive black holes almost immediately after the Big Bang. These objects have been observed in the early universe. However, their existence is at odds with the standard cosmological model, where dark matter is composed of WIMPs, because it predicts that the first black holes originated from massive stars, which must consume matter for billions of years to become supermassive.

The new theory also helps explain the existence of black hole pairs with the total mass of more than 100 solar masses. Their formation is prohibited by the astrophysical model for binary stars, but their merging into larger black holes has been observed by the Laser Interferometer Gravitational-Wave Observatory (LIGO) and Virgo gravitational wave interferometer. Researchers think that these could be primordial black holes born at the stage of pion formation in the early universe.

Physicists hope that the future observations with the James Webb Space Telescope, Athena and Euclid, and Earth-based Square Kilometer Array will put their theory to the test. The new model of dark matter predicts significantly more frequent black hole mergers in the early universe, which could potentially be detected during future runs of the LIGO gravitational observatory or planned LISA experiments.

Physicists identify a quantum membrane in merging black holes
Screw-propelled robots could enable mining in space
Where rocks come alive: OSIRIS-REx observes an asteroid in action
The temperature of the elements