The early stage nucleation and development of the harmful TCP phases in a 3rd generation nickel-base single crystal superalloy is studied. 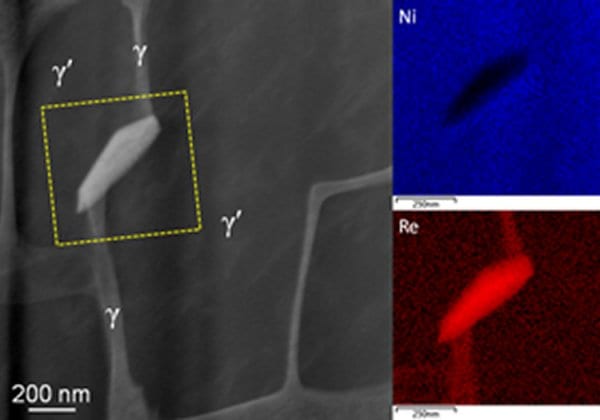 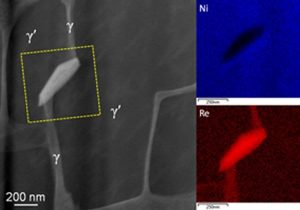 Nickel-base superalloys are one of the most advanced engineering materials using in civil and military aircrafts and power plants due to excellent mechanical strength, and corrosion and oxidation resistance even close to their melting points. The excellent high temperature properties of superalloys are achieved generally by two main hardening mechanisms: one is precipitation hardening by a stable microstructure composed of nickel matrix and a fine dispersion of an intermetallic compound, and the other is solid solution hardening by the addition of a different soluble refractory metals, such tungsten and rhenium.

However, the slow diffusion of heavy rhenium in the nickel matrix can induce the formation of harmful intermetallic compounds such as topological close-packed phases (TCP) during in-service, which degrade the mechanical properties of superalloys and enhance the accumulation of damage during deformation.

The University of Birmingham and Rolls-Royce plc investigated the early stage nucleation and development of the harmful TCP phases. Extremely fine particles (about 100 nm across) containing large amounts of rhenium formed in manufacturing stages for turbine components, i.e. during casting, and heat treatment. In addition, two different types of particles were detected in an intermediate layer: round-shaped particles at the starting point for the formation of the layer, and needle-like particles at the middle of the layer or near the terminating point. This observation suggests that the needle-like particle probably showed similar growth characteristics to a TCP phase through the diffusion of rhenium after nucleation from a point containing high amounts of rhenium.  From a supersaturated matrix, excessive rhenium atoms, over a solubility limit, were probably diffused out and formed Re-rich particles during casting or heat treatment, and then may be sites which later developed into TCP phases. Finally, even though TCP phases usually formed during long period heat treatment or in-service, they could form even in the early stages of manufacturing of turbine blades with low amounts of TCP phases.