Crosstalk Between Transcription and Metabolism: How Much Enzyme is Enough for a Cell?

A recent review by Donati, Sander and Link tries to answer this question. 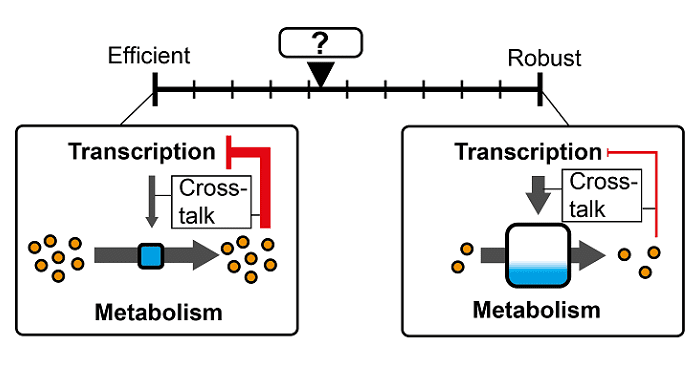 In order stay alive and proliferate, cells must metabolize nutrients from their environment. As the availability of nutrients is constantly changing, often with phases of starvation, cells have to find the right balance between a robust metabolism (e.g. withstand phases of starvation) and an efficient metabolism (e.g. using nutrients in the best possible way). This decision depends mostly on the cellular concentration of enzymes, the proteins catalyzing hundreds of biochemical reactions in the metabolic network.

But how can a cell decide how much enzyme is enough for each reaction? While the information encoding the identity of enzymes is recorded in the DNA of an organism, the information on how much and when an enzyme is produced is carried by different factors. One of the most decisive factors is regulation of transcription, the first step of gene expression in which information is transcribed from DNA to messenger RNA. It is known that transcription can be influenced by the cellular concentrations of small molecules and intermediates in the metabolic network, the metabolites. For future research it will be important to clarify to which degree there is a crosstalk of metabolites and transcription.  A compelling hypothesis is that this crosstalk precisely informs cells about how much of each enzyme they require.

In a recent article published in WIREs Systems Biology & Medicine, Stefano Donati, Timur Sander and Hannes Link (Max Planck Institute for Terrestrial Microbiology, Germany) try to draft a picture of how widespread the crosstalk between transcription and metabolism could be, by reviewing the most recent literature. Even though advances in metabolomics and transcriptomics technologies put forward a considerable knowledge about molecular mechanisms, it turns out that even for well-studied microbial model organisms, the crosstalk between transcription and metabolism remains elusive.

Being able to answer the question of how much enzyme is enough for a cell would benefit a wide range of possible biotechnological applications. For example, microbial cell-factories used in industrial applications could be engineered to be much more efficient than they are at present. Moreover, diseases like cancer often entail re-wiring of metabolism at the cellular level, and a thorough comprehension of the crosstalk could pave the way towards possible new treatments.

Contributed by the Authors