Insights gained from the hard landings of tree-climbing geckos leads to better and controlled perching in robotic aerial vehicles. 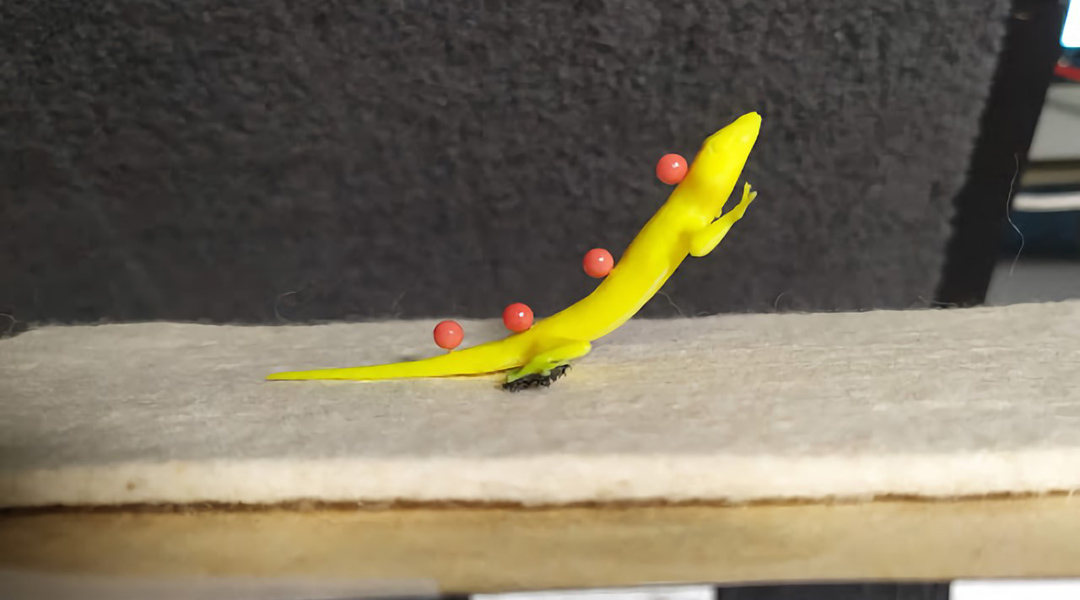 Agile, flying robots are already playing an important role in a number of sectors and applications, including data gathering, search and rescue, crop surveillance, and forest fire management. However, even state-of-the-art drones have a limited ability to land on uncertain terrain and difficult perches, such as the side of a building, tree, or pole.

“Landing rapidly on vertical surfaces is one of the biggest challenges in aerial robotics,” explained Ardian Jusufi, Max Planck Group Leader at the MPI for Intelligent Systems and the Swiss Federal Labs for Materials Science Technology. “Emulating this maneuver would expand their application space, such as in a post-earthquake rubble field, or to assist fire-fighters, among other search and rescue scenarios.”

Current robots rely on rotors or ailerons to slow down and reorient themselves prior to landing, says Jusufi. “Landing on a wall requires integrating multiple sensor streams to control aerodynamic forces to bring the robot in the pitch-up body orientation desired for a dedicated perching maneuver,” he explained. “The process of integrating multiple sensor streams is computationally expensive, leading to slow reaction times to disturbances from the environment.”

It was during a field trip to the rainforests of Singapore that Jusufi came across the Asian flat-tailed gecko, renowned not only for its unparalleled climbing capabilities, but its ability to glide between trees and land on vertical surfaces.

“I was surprised to observe that these lizards crash head-first into the tree trunk and pitch back, head-over-heels at extreme angles from the vertical surface, in order to land,” said Jusufi. “They collide with the tree at astounding speeds of 22 km/h.”

These lizards rely on their torso and tails to dissipate the kinetic energy accumulated during their gliding, sticking their landing by pressing their tail against the trunk and preventing them from falling head over heels. “I saw the potential of this mechanism in creating multi-modal robots capable of perching in similar settings,” said Jusufi.

In a recent study published in Advanced Intelligent Systems, Jusufi and his group therefore developed a soft-bodied prototype based on the gecko’s size, shape, and weight, and which uses what he termed a “fall arresting response”. As with the gecko, the robot’s tail was critical to enable a safe landing, along with torso stiffness.

“A compliant torso allows the robot to dissipate significant amounts of kinetic energy on impact,” explained Chellapurath, the lead author in this study. “Post impact, the bending torso allows for the hind limbs of the robot to engage with the surface, and the stiff tail reduces the rebounding.”

As the tail is pressed against the wall, it provides a counter torque and prevents the robot from rotating head first and falling head over heels. “In this spirit, morphing structures and adaptive stiffening increasingly enable unprecedented robot ambulation with simplified control provided by biomimetic materials and systems relationships,” said Jusufi.

Surprisingly, for the crash landing to work properly, the team determined the need for a full-length tail — a half tail would not do. “This is especially interesting because it supports the idea that these lizards have potentially evolved to have tails that are the appropriate length for their bodies locomotion capacity,” said Pranav Khandelwal, one of the authors of the study.

The scientists also tested different approach angles and impact speeds to account for different approach trajectories in order to simulate real world scenarios. The “fall arresting response” worked well even when the angle and speed of approach changed, demonstrating the versatility of this bio-inspired perching mechanism.

“The fall arresting response of geckos crash landing on a wall highlights the importance of compliance in the back and tail structures to ensure robustness to uncertainty in unstructured natural terrain,” commented Robert Wood, professor at Harvard University who was not involved in the study. “And more broadly, the work by Jusufi and his lab highlights the utility of using bioinspired robots to explore questions in biology in unprecedented ways.”

This study provides new insights into the requirements of hard landings and how they can be used to increase stability and simplify controlled perching in aerial vehicles.

The Max Planck group feels there is potential to expand landing robustness by further fine tuning of the robot’s material properties and testing it on a variety of challenging surfaces in different environments to push the robot’s capabilities.