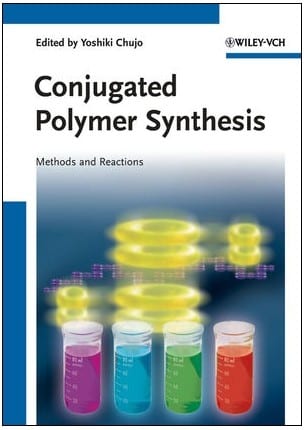 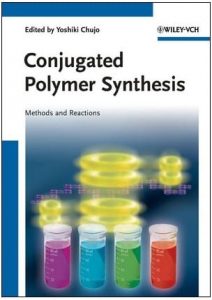 Conjugated polymers are novel materials that possess not only the optoelectronic properties of semiconductors but also the mechanical properties and the processing advantages of polymers. Research into conjugated polymers has become an integrated area that includes chemistry, physics, and material sciences.

Research on conjugated polymers has twice been awarded Nobel prizes in chemistry – the Nobel Prize for Chemistry in 2000 to Professors Alan Heeger, Alan MacDiarmid, and Hideki Shirakawa for their discovery that “doped” polyacetylene can conduct electricity and the Nobel Prize for Chemistry in 2010 to Professors Richard F. Heck, Ei-ichi Negishi, and Akira Suzuki for their invention of novel palladium-catalyzed cross couplings that can be used for the convenient synthesis of organic and conjugated polymer materials. Nowadays, the synthesis of conjugated polymers is still a quickly developing area that has drawn particular attention worldwide.

The fourth chapter by Ben Zhong Tang et al. summarizes the recent advances of synthesis of functional hyperbranched conjugated polymers. Chapter 5 written by Yasuhiro Morisaki and Yoshiki Chujo deals with through space conjugated polymers, which are composed of layered aromatic rings in a single polymer chain, in which the charges and energy are mainly transferred by hoping mechanism.

Chapter 6 written by Masayoshi Takase and Masahiko Iyoda treats of the synthesis and properties of shape-persistent conjugated nano-sized macrocycles, focusing on the recent developments in planar or nearly planar giant π-conjugated macrocycles with particular regard to the synthetic methods and their versatile properties. Because of their unique structures and novel properties, shape-persistent giant macrocycles have attracted much attention in supramolecular chemistry and materials science, and they are of interest for structure-property relationships, one-dimensional (1D) and two-dimensional (2D) nanostructures, and single molecule electronics owing to the efficient guest incorporation and electronic properties depending on their sizes and supramolecular structures.

Chapter 7 by Atsushi Nagai and Yoshiki Chujo, chapter 8 by Paul W. Siu and Derek P. Gates, and chapter 9 by Kensuke Naka and Yoshiki Chujo describe recent examples of exotic element-containing conjugated polymers, which include the synthesis and applications of boron atom, phosphorous atom, arsenic atom, and antimony atom containing π-conjugated polymers. As definition, metallopolymers are organic polymers that contain metals. Researches on metallopolymers have become one of the fastest developing fields in macromolecular chemistry. Chapter 10 written by Ulrich S. Schubert et al. summarizes the synthetic strategies to conjugated main-chain metallopolymers. Three kinds of representative metallopolymers, which contain terpyridines, porphyrins, and metallaynes within the polymer main chain, have been highlighted in this chapter.

The final chapter, written by kazoo Akagi, discusses the preparation of helical polyacetylene with a super-hierachical structure in an asymmetric reaction field consisting of chiral nematic liquid crystal (LC). The films prepared with this method exhibit high electrical conductivities of 1.5 ~ 1.8 × 103 S cm-1 after doping with iodine. This opens the possibility of preparing other conjugated polymer superstructures with the nematic LC as an asymmetric medium for polymerization.

This book can be considered a very useful handbook for organic, polymer, and materials scientists who are interested in the chemistry and optoelectronic properties of conjugated polymers.

Automating the Production of Advanced Materials
Zhenan Bao: Shaping the future of wearable electronics
The world's most efficient lithium-sulfur battery
A new look at color displays