The 36th APS, which took place in Lorne, Victoria, from November 20-23, featured talks on a wide range of polymer science topics from both local and international speakers. 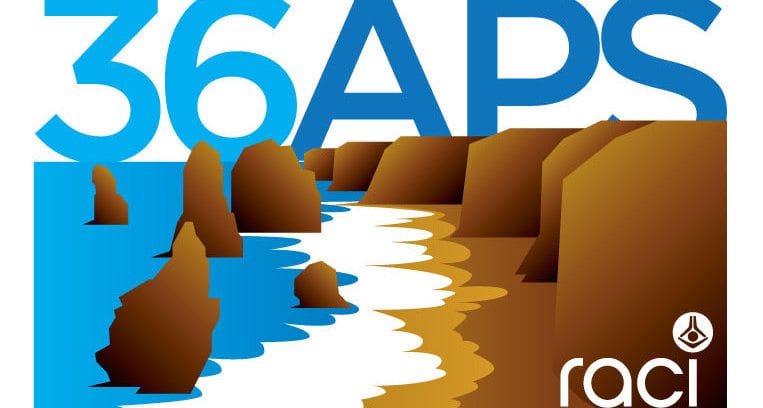 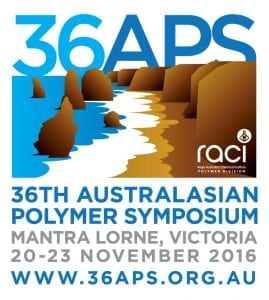 The 36th Australasian Polymer Symposium (APS) ran from the 20th to 23rd of November 2016, and was hosted in the idyllic seaside town of Lorne, Victoria. APS is a consistently well-attended conference and 2016 was no exception with 295 delegates making the trip to Lorne to hear from 200 presenters of all career levels, including 6 plenary and 28 keynote speakers from institutions both within Australia and internationally.

The conference benefited from a series of exceptional plenary speakers, beginning with Professor Tom Davis from Monash University, who presented the cutting edge work currently being undertaken at the interface of polymer science and bionanotechnology in the ARC Centre of Excellence (CoE) in Convergent Bio-Nano Science and Technology (CBNS), of which Professor Davis is both the director and a chief investigator. This set the theme for many of the presentations to come from staff and student researchers of the CoE in CBNS, who were well represented at APS. 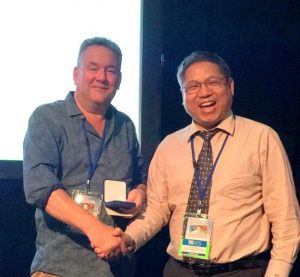 The opening session of the conference also saw the presentation of the prestigious Batteard-Jordan Australian Polymer Medal. The Batteard-Jordan medal is the highest award of the RACI Polymer Division and is given for outstanding achievement in polymer science in Australia, a criterion which Professor Davis has certainly met through his work with the CoE and previously.

Following Professor Davis was Professor Richard Spontak from North Carolina State University. In his work with shape memory materials and conductive thermoplastic elastomers, Richard seeks to ‘teach old materials new tricks.’ He achieves this through a combination of inventive processing and meticulous characterization to select conditions which can induce unexpected behaviours in previously well-studied materials, such as improved elasticity of thermoplastics .

Professor Heather Maynard from the University of California opened the second day of presentations with her plenary discussing the use of glycopolymers to stabilise a range of enzymes and proteins, improving their utility in a range of applications from food science to therapeutics. This was followed on the third day by Professor Frank Caruso from the University of Melbourne, who is also part of the CoE in CBNS. In his presentation Professor Caruso elaborated on work mentioned in passing by Professor Davis in the opening plenary. In particular he spoke of the challenges and recent advances in the field of bio-responsive polymeric materials and the ways in which their responsiveness can be capitalised upon for nanoparticle-based drug delivery. After Caruso’s talk the Polymer Citation award was presented to Professor Amanda Ellis from Flinders University to recognise the significant contributions she has made to polymer science and technology throughout her career. Amongst many other things, Amanda has contributed to the polymer community through her role as chair of the RACI Polymer Division in 2014/15 and past-chair in 2015/16.

The penultimate plenary was delivered by Professor Alan Rowan, who has recently moved to Australia to take up the position of Director at the Australian Institute of Bioengineering and Nanotechnology at the University of Queensland. In his talk, Rowan outlined the ways in which polymeric materials could be engineered to display the type of nonlinear mechanics commonly observed in biopolymers and made a case for the importance of this behaviour in interactions between these materials and biological systems, all backed by a solid base of truly advanced materials characterisation.

Finally, the concluding plenary was delivered by Professor Takuzo Aida from the University of Tokyo who gave a lively and engaging snapshot of each of the many varied research topics his group is involved in, from clay nanosheet hydrogels with anisotropic mechanical properties to devices capable of wireless, rudimentary locomotion stemming from light-responsive soft matter incorporated into their design. The breadth of subject matter this presentation covered echoed that of the conference itself and provided it with a fitting end.

In addition to the wealth of fascinating polymer science, the conference also offered a number of excellent networking opportunities, of which the poster session was a personal highlight as an indispensable opportunity to engage with the presenters on the topic of their work. Another key social event was the symposium dinner which, in addition to drawing the conference to a close, offered the opportunity to acknowledge those whose presentations at the conference were truly exceptional. Firstly the Treloar prizes were awarded to those student and ECR researchers who gave oral and poster presentations of particularly high quality. This year the Treloar Oral prize was awarded to William Wong from the Australian National University and the Treloar Poster prize was awarded to Fatemeh Karimi from the University of Melbourne. Following this two Wiley International ECR Prizes were presented to Jan Steinkoenig from Karlsruhe Institute of Technology and Dillon Love from University of Colorado Boulder for the best presentations from international students and ECRs. Finally, Professor Qiao presented Dr. Ian Dagley, CEO of the CRC for Polymers, the Bruce Guise Polymer Science and Technology Award for his major contribution to industrial research in polymer science and/or technology.

In both the quality of science presented and the bringing together of the Australasian and broader polymer community, the 36th APS was undoubtedly a great success and a credit to the hard work put in by its organisers. The Conference convenor Professor Qiao reflected that the APS series has become the “family meeting place” for the Australasian polymer community and their high-quality science and success are the outcome of the constant support of polymer researchers, Ph.D. students and international participants. This year’s instalment upholds the continuously strengthening reputation of this conference and the next two years look set to see the APS grow even further with its incorporation into the RACI Centenary Congress to be held in Melbourne from the 23rd to 28th of July 2017, and beyond that as a part of Macro18 to be held in Cairns in mid-2018.