The 35th APS took place on the Gold Coast, Queensland, from the 12th - 15th of July: three and a half days of talks from numerous areas of polymer science. 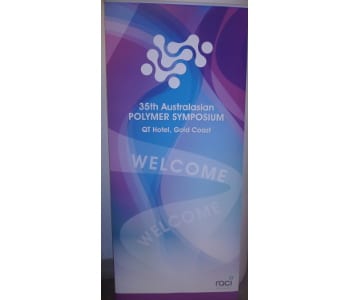 The 35th Australasian Polymer Symposium (APS) took place on the Gold Coast, Queensland, from the 12th – 15th of July, and encompassed three and a half days of stimulating talks from numerous areas of polymer science. There were 260 delegates from Australia and around the world in attendance, with six plenary speakers and 24 keynote speakers, five of whom were Early Career Researchers. Also, as is commonly seen at the APS meetings, it was pleasing to see a large proportion of the session talks being presented by research higher degree students.

The meeting was kicked off on the first day with two opening plenary lectures. The first was from Prof. Mitch Winnick from the University of Toronto, talking about his work investigating metal-chelating polymers and their potential for biological applications of sensing and imaging. The second plenary was given by Prof. Yanlei Yu from Fudan University, and was an introduction into the field of liquid crystal polymers: crystalline aromatic polyesters that form areas of highly ordered structures when in the liquid phase. Specifically, Prof. Yu presented her work on the physical responsiveness and deformation of these materials to light stimuli.

Prof. Bjorn T Stokke from Norwegian University of Science and Technology initiated the first of three full days of presentations with a plenary lecture on responsive polymer hydrogels. He spoke about his work in developing label-free biosensing based on minute changes in the swelling of hydrogels in response to a biological stimulus, and demonstrated this incredibly sensitive technology with a glucose sensing material and others. Prof. Benjamin Hsiao from Stony Brook University delivered a captivating plenary demonstrating an example of translation of laboratory to industry with his work on nanofibrous membrane filters for high-flux water purification. His technology has shown the ability to remove bacteria and viruses from water samples and the filters are highly tunable.

Prof. Werner Joseph Blau from Trinity College Dublin began the final day by describing his interdisciplinary work with materials science and physics in the development of nanocarbons and atomic crystals. His layered materials have a thickness of roughly 5 nm, enabling them to be classed as two-dimensional nanosheets, and he described an example of nanosheets of molybdenum disulfide and their capabilities for saturable absorption.

It was wonderful to see such a diverse range of polymer science being presented during the course of the meeting; however, one of the dominant themes and also a personal highlight of the conference was the topic of “photopolymerization”: a growing field of polymer science where controlled polymerizations can be conducted at room temperature without the need for expensive radical initiators. The rationale of this field is that these techniques will allow the scale-up of traditional laboratory polymerization techniques for translation into industry. Not only were there entire sessions dedicated to the topic, but the theme of photo-induced techniques was seen through all the different sessions, with notable examples from Prof. Dave Haddleton with UV-light induced ATRP polymerizations, A/Prof. Cyrille Boyer activating RAFT polymerization with chlorophyll sourced from spinach leaves and Dr James Blinco investigating nitroxide-mediated photopolymerizations.

The business side of the conference was concluded with a final plenary speaker, Prof. Mats Andersson from the Ian Wark Research Institute, who discussed his work on polymeric materials for energy and conducting applications. In particular, he is interested in the development of highly conductive polymer materials for high-voltage power cables, and also the improvement of current solar cell technology using his materials. In a time where renewable energy is of interest it was pleasing to see his research highlighted.

Finally, to officially bring the conference to a close and provide additional networking opportunities, a dinner was held at Movie World on the final night. It was considered by all delegates to be one of the most impressive ever held. Not only were we able to ride the Superman rollercoaster and be treated to performances from Marilyn Monroe and Elvis Presley while we ate from an impressive buffet of international foods, but the dinner also provided a great atmosphere for networking with all the plenary and keynote speakers.

The conference dinner was also the occasion to present awards, and was started by Prof. Andrew Whittaker presenting the prestigious Polymer Citation award to Dr Kevin Jack from University of Queensland. This award is given to recognise significant contributions to polymer science and/or technology throughout Australia and New Zealand. Prof. Martina Stenzel presented the Sangster Prize to Dr Kristofer Thurecht from University of Queensland, for recognition of significant achievements by developing researchers. The aim of this prize is to encourage the recipient’s work in polymer science or technology and to help them gain international recognition. Kristofer Thurecht kept the stage to present the Treloar Prizes: student and ECR prizes for the most outstanding poster and oral presentations during the conference. The poster prize was awarded to Molly Rowe from the University of New South Wales, and the oral prize was jointly awarded to Emma Brisson from the University of Melbourne and Lewis Chambers from the University of Queensland. Finally, Dr Esther Levy presented two Wiley sponsored prizes for the best presentations by international students and ECRs to Neomy Zaquen from Hasselt University and Liliana Gustini from Eindhoven University of Technology.

On closing, the chair of the symposium, Prof. Amanda Ellis from Flinders University said “I thought the conference had a great program of speakers, both national and international, and it was great to see networking throughout the event, including all the fun at the conference dinner”.

The next APS meeting will be held in Lorne, Victoria from the 20th-24th November, 2016, and will be chaired by Prof. Greg Qiao.