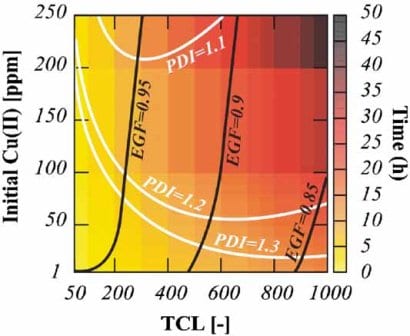 Polyacrylates significantly contribute to the polymer market, mainly in applications such as paints, adhesives, textiles, and coatings. For the industrial production of polymers free radical polymerization (FRP) is a well-established procedure since this polymerization technique is applicable to a wide range of monomers. One drawback, however, is the inherent difficulty to control the end-group functionality (EGF) and chain length of the polymer during the production process. Especially in the coating industry, a better control over the EGF in the polymer could avoid the use of expensive functional monomers.

One approach to achieve control over the polymer microstructure is given by controlled radical polymerization (CRP). In particular, atom transfer radical polymerization (ATRP) is a frequently used CRP technique in which macroradicals are temporarily and catalytically deactivated during the polymerization by a transition metal complex to a dormant form which contains EGF. The selection of the ATRP catalyst is crucial to control the branching level in polyacrylates, whereas the amount of the catalyst determines the economic profitability. Initiators for continuous activator regeneration (ICAR) ATRP represent one of the most important techniques to reduce the amount of ATRP catalyst. The control over polymerization rate and polymer properties can be directly manipulated by adjusting the polymerization conditions.

Marie-Françoise Reyniers and co-authors present a detailed kinetic modeling analysis for the bulk ICAR ATRP of n-butyl acrylate (nBuA) using the commercially available N,N,N’,N’’,N’’-pentamethyldiethylenetriamine (PMDETA) as ligand and copper (II) bromide (CuBr2) as transition metal salt. The activation/deactivation kinetic parameters are assessed based on literature experimental data for the normal bulk ATRP of nBuA under consideration of the reactivity difference between secondary and tertiary macrospecies. The inﬂuence of the targeted chain length (TCL) and catalyst amount on the polymerization rate and control over polymer properties is mapped in detail. For TCLs up to 1000, ICAR ATRP can be successfully applied within reasonable polymerization times and ppm levels of the ATRP catalyst, whereas for moderate TCLs, slightly higher ppm levels are required. A limited loss of end-group functionality is a result in all considered cases.