A true invisibility cloak would encompass an object, and manipulate light, in a manner such that it traveled around the object, rather than reflecting off it. A recent paper reports some exciting progress toward such a design. 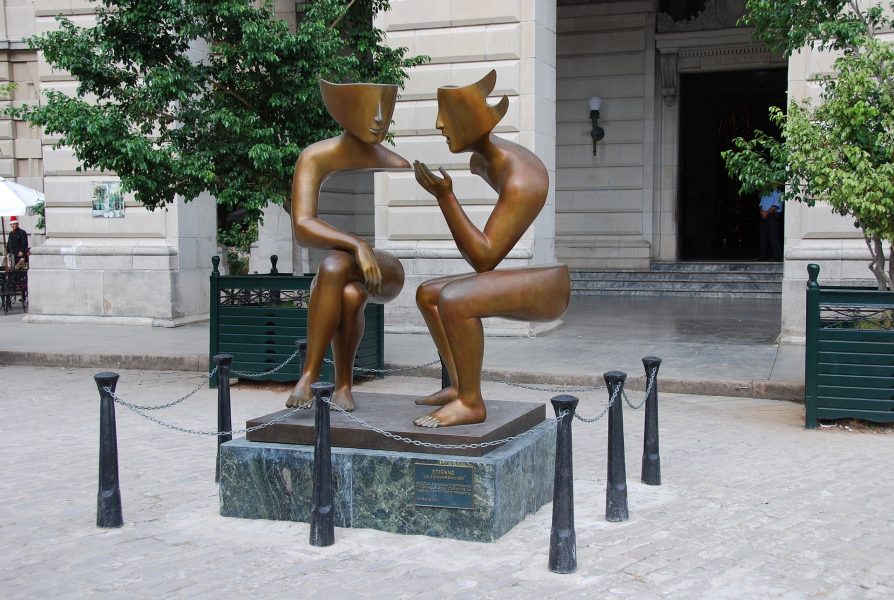 Science has a famously patchy record where it comes to keeping pace with science fiction. One only needs to remember the great hoverboard debacle of 2015 to be reminded of how disapointing the relationship can be. But where it comes to realizing ideas born from pre-enlightenment fairytales, science is making strides in the right direction. 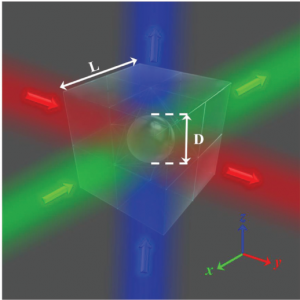 Schematic of an ideal invisibility cloak, showing light’s interaction with the device in three dimensions.

In 2006, a theory called transformation optics was proposed that offered a framework for rendering objects invisible. Even with the theory in place, applications have been quite hard to realize, and all of the previous developments in the field have relied on special cases.

The first reported ‘invisibility cloak’ was a 2 dimensional cloak that only worked for microwaves. Over the next 10 years numerous 2D cloaks of varying effectiveness have been reported. These cloaks tend to rely on the manipulation of reflected light to give the appearance of a flat surface. This predominantly enables relatively flat objects on flat surfaces to be hidden.

A true 3 dimensional cloak would encompass an object, and manipulate light, in a manner such that it traveled around the object, rather than reflecting off it, making the object invisible from all angles of perception. Research published in Advanced Science takes an important step towards this goal. 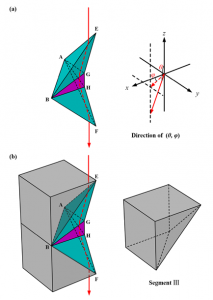 The researchers from China build a box that is constructed from 2 types of glass. The outer layer is simply 8 sheets of unspecialized glass assembled into the shape of a box. The inner layer is built into a 3 dimensional complex shape using glass designed specially to refract light around the center of the cavity within the box. The schematic (right) shows a segment of that inner glass complex bending light around a central point.

The researchers set up two experiments to determine the effectiveness of their device. In the first, they place a small sphere in the central cavity of the cloaking device. In the second, they place a highly symmetrical ‘hexapod caltrop’. They then project images at these two objects and observe how much of the projected image is visible on a screen behind the hidden object.

The results are shown (below). While it is clear that this prototype cloaking device does not perfectly hide the objects, a significant proportion of the projected images is still visible after passing ‘through’ the objects. The researchers hope that their work will have applications in surveillance technology and for security and defense related purposes. 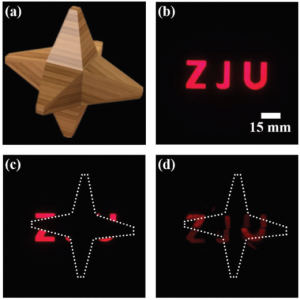 d) Shows the projected image on a screen after passing ‘through’ the hexapod caltrop. b&c are the necessary controls. 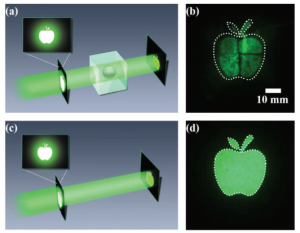