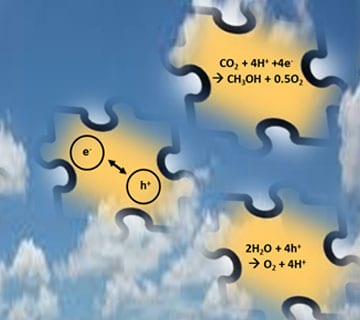 Being British by birth I was brought up in a climate where the main topic of conversation was the weather and so I became acclimatized to it raining most of the time. Now a naturalized Canadian, I have learned to live with and enjoy the extremes of hot and cold weather. As a scientist working in the field of artificial photosynthesis, where worrying about the effect of carbon dioxide on the weather usually motivates funding, I am becoming increasingly concerned and frustrated about the dissent that currently permeates the debate on the evidence for anthropogenic causes of weather change, even amongst climate scientists. This uncertainty is exacerbated by self-interest lobby groups, the press and media who benefit from climate confusion.

The difficulty of unequivocally separating fact from fiction is disquieting for scientists who are incessantly searching for support from funding bodies, peer reviewers, media outlets and the public to further their thesis that artificial photosynthesis could provide a long-term solution to the intertwined climate change and sustainable energy problems facing society today. Climate confusion is also a conundrum for government, industry, institutional investors who are contemplating support of artificial photosynthesis research and anyone interested in following scientific advances. Suffice to state, the only ‘truth’ we know fairly certainly is that there is ‘evidence’ of anthropogenic climate change and due to the nature of the problem and the nature of science this ‘evidence’ will always remain what it is, ‘evidence not certainty’.

Why Do We Care?

The climate change debate continues to generate discussion amongst scientists, economists, sociologists, legal scholars and policy makers attempting to analyze the risks and costs posed by over-reacting or under-reacting to the potentially serious and adverse consequences that could flow from a scenario of increasing global warming from escalating greenhouse gas emissions. Scientists can estimate the risk associated with not doing anything as well as doing something and with this knowledge, political, social and economical decisions can be formulated and implemented.

With all this uncertainty, one thing is indisputable to chemists, materials scientists and engineers working on different forms of renewable energy, such as solar cells, wind mills and tidal mills that produce electricity. They all suffer from the intermittency and variability of solar irradiance, air stream and tidal power as well as the difficulty of storing large amounts of electricity, as it has to be used essentially as it is produced. Hence there exists an urgent need to find a green way of producing energy in a form that can be transported and stored for use on demand. A long-term solution to this important problem is to discover materials and processes that can make fuel from sunlight akin to the way the leaf utilizes sunlight to transform carbon dioxide and water to carbohydrates in a process called photosynthesis. 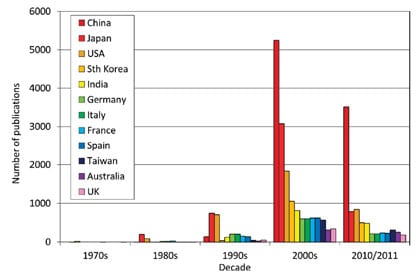 In this context, solar fuels research is aimed at harnessing solar energy via the paradigm of artificial photosynthesis to make an energy rich portable fuel. It is inspired by the belief that the long term use of fossil fuels is not sustainable and not practical and the rush to develop bio-fuels is short-sighted as evidence grows that its production, by any means, has a poor energy balance and does not lead to any appreciable reduction of carbon dioxide emissions that could be better achieved by modest energy conservation. Moreover, with a population increase of about 75 million per year, bio-fuels are considered a regrettable misuse of land and water resources sorely needed to maintain the earth’s growing population.

There is also a debate whether carbon capture and storage (CCS) should be implemented to achieve climate change targets. Arguments against CCS is that it is a largely untested technology with health and safety concerns, it is energy intensive to apply and it will raise the cost of electricity, so much so that a renewable energy infrastructure could be developed quicker and cheaper.

The longer term investment in artificial photosynthesis research and development, rather than the shorter term focus on bio-fuels and carbon capture and storage, presents a more practical and appealing solution to the intertwined climate change and sustainable energy challenges faced by our society today. Whilst the scientific and technical hurdles of artificial photosynthesis are in the process of being understood and surmounted, through strong and sustained solar fuels basic directed research over the next 10-20 years, a global artificial photosynthesis strategic plan, akin to the human genome project of the 1990’s, can be formulated and implemented to provide a lower cost and more sustainable green fuel, offering genuine rather than misplaced benefits promised by bio-fuels and carbon capture and storage.

(ii)    Discovering materials that can mimic photosynthesis is a grand challenge.

(iii)    Increasing the public visibility of fuel from the sun by artificial photosynthesis would encourage government, industry and institutional stakeholders to invest in the rapid deployment of solar fuels technology.

(iv)    Artificial photosynthesis research and development should be allowed to grow naturally and rationally and not motivated by a crisis that destabilizes societies. 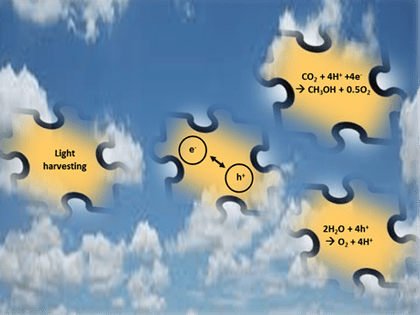 Unfortunately the low cost of and easy access to fossil fuels have meant that funding for artificial photosynthesis has remained small compared to carbon capture and storage technologies. Nevertheless, activity in the field of artificial photosynthesis is exponentially increasing and new materials ideas, innovative photocatalytic reactors, techno-economic analyses for scaling materials and processes and manufacturing solar fuels, are appearing daily in the literature. By coordinating the research efforts and knowhow of scientists around the world, progress will accelerate towards the practical realization of fuel from the sun, providing thereby a secure and long-term solution to a carbon neutral secure energy supply, to ensure the health and well being of future generations.

The discovery of the sunlight powered photocatalytic reaction: CO2 + H2O + hν → CH4 or CH3OH ignited the idea that anthropogenic greenhouse gas could be recycled from a waste product to a value-added fuel or chemical feedstock. This breakthrough inspired scientists around the world to search for materials and processes that could match or exceed natural photosynthesis. Three decades later, after exploring essentially every corner of structure- composition space in the periodic table of the elements, the rates and efficiencies of gas and aqueous phase CO2 + H2O + hν → CH4 or CH3OH photocatalysis have improved very little over the initial report and researchers in the field of artificial photosynthesis continue to scramble for the magic bullet material that will provide the x1000 enhancement to make the process techno-economically competitive with alternative sources of methane or methanol.

So what is the origin of the x1000 problem? It is a kinetics conundrum where the challenge is to discover chemistry approaches to reduce the rate of recombination of photo-generated electron-hole pairs in the picosecond to nanosecond range to the millisecond to second time regime so that the much slower chemically and electronically coupled water oxidation and carbon dioxide reduction reactions with the electrons and holes and protons can compete. It is a matter of selectivity, namely how to tailor materials to gain control over the ratio of the rate of productive e-h reaction chemistry to unproductive e-h recombination, which currently stands at around x1000. This concept, simple in theory, is proving to be exceptionally difficult to implement in practice. 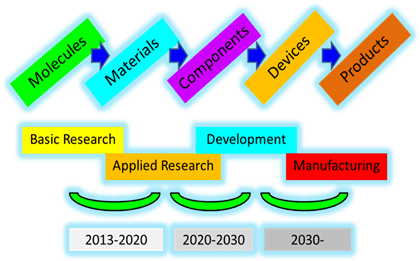 Assembling the right pieces of the puzzle in order to prolong the lifetime of photo-generated electron-hole pairs in photocatalysts, illustrated in Figure 2, are well documented and include structuring and doping of materials at the nanoscale, junctions between semiconductors and liquids, semiconductors and metals, semiconductors and semiconductors, co-catalysts, blocking layers, hole scavengers, redox-shuttles, electron transport cascades, conducting substrates, and bias potentials.

Thirty four years since the pioneering 1974 artificial photosynthesis work of Honda and co-workers, researchers in the field of solar fuels are still searching for at least three-orders of magnitude enhancement in the conversion rate and efficiency, to endow it with the technological significance and commercial potential it promises. If this was an easy task it would have been done by now. In some ways the long arduous adventure to discover a solar fuels material that can compete and beat nature’s leaf reminds me of Michael Grätzel’s 1991 landmark discovery of the dye sensitized solar cell with a reported efficiency 9% and the following twenty two years of determined heroic effort it took to achieve 15% bestowing it with the potential to make it a low-cost contender for the silicon Samurai!

Experts in the chemical industry have recently evaluated the science and technology time line for the cost-effective transformation of renewable energy to chemical energy in the form of organic molecules that can be easily stored, transported and integrated as a raw material and source of power and fuel into the chemical production food chain.

Because the chemical industry is one of the largest consumers of energy from fossil fuels, it is in their self-interest to learn how to manage carbon dioxide as a chemical resource rather than a waste product and strive to develop a carbon dioxide based resource-efficient economy for powering their industrial processes and providing green fuels and energy for a sustainable society. The energy intensive chemical industry sees the introduction of carbon dioxide into the petrochemical value chain as a source of raw materials, power and fuels, using known catalytic processes working towards a viable and cost-competitive solar fuels technology. 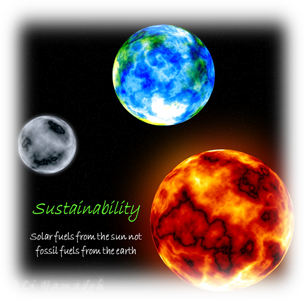 By inspecting the timeline that the chemical industry proposes, to increase the use of renewable energy, one can see the short term perspective (2020) involves the utilization of excess electricity from wind and solar for electrolyzing water to hydrogen, which can be used in known industrial catalytic processes to reduce carbon dioxide to chemical vectors such as syngas, methanol, formic acid, alkanes, olefins and dimethylether. For these processes to be cost effective the price of electricity has to be around $0.05/kWh.

The medium term view of the chemical industry (2030) is that hydrogen production technology from the photo-electrochemical splitting of water, will improve in efficiency and cost competitiveness compared to other sources of hydrogen and will be used to catalyze the reduction of carbon dioxide to organics providing the over-potential problem can be overcome. This technology becomes interesting from a commercial standpoint when the cost of producing hydrogen falls in the range $2-3/kg.

In the long term view of the chemical industry (2030–) it is highly likely that materials for an artificial leaf technology will eventually be developed which are able to efficiently capture and convert carbon dioxide, water and sunlight directly to specific chemicals and fuels in a distributed production system. Industry experts acknowledge huge challenges have to be overcome with regards to the discovery of photocatalysts that can mimic and even surpass the photosynthetic performance of the biological leaf.

Strong and sustained long-term basic research on solar fuels is envisioned to be able to deliver the fundamental knowledge that will enable the subsequent steps from basic to applied research to development and manufacturing, envisioned in the carbon dioxide to solar fuels time line, Figure 3.

Success in this endeavor when achieved will be celebrated as a massive breakthrough and will set the field of solar fuels alight thereby setting the scene for the development of global artificial photosynthesis renewable energy technologies and policies, Figure 4.