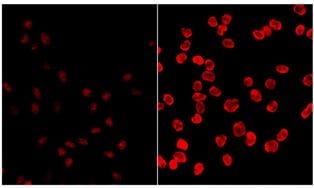 High power femto-second laser pulses used for in vivo nonlinear optical imaging can form DNA products, which may lead to carcinogenesis. A modified cancer risk model now shows that the cancer risk is negligible above that due to regular sun exposure.

In the field of biomedical imaging, nonlinear optical (NLO) imaging is gaining importance for applications such as visualizing collagen, elastin and cellular metabolic activity. The nonlinear processes needed for NLO imaging, such as multi-photon excitation (MPE) and second harmonic generation (SHG), require an extremely high concentration of NIR photons to excite biological fluorophores. While conventional lasers could lead to overheating and tissue destruction, femto-second pulsed lasers conveniently provide the high photon fluxes. The harmful effects are restricted to the irradiated tissue and do not have long term effects. However, studies have shown that MPE processes can form UV photoproducts from DNA such as cyclobutane pyrimidine dimers (CPDs) which may eventually lead to carcinogenesis. Thus, how safe are NLO biopsies?

To evaluate these safety aspects, a team from Erasmus Medical Centre, Rotterdam and from Utrecht University (The Netherlands) have estimated the risk of squamous cell cancer induction in skin following nonlinear optical imaging. First, it had to be considered that CPDs are routinely produced in human skin by the UV component of sunlight – exposure to sunlight already causes a certain risk for skin carcinogenesis, especially squamous cell carcinoma (SCC). Therefore, the scientists decided not to evaluate an absolute carcinogenic risk due to NLO imaging, but to estimate the relative carcinogenic risk of SCC from NLO imaging above the risk due to regular sunlight exposure.

As a base, they chose an established carcinogenic risk model for humans, which estimates risk from exposure to continuous wave (CW) laser. This model was modified and expanded. Instead of CW UV laser radiation, the cumulative radiation received due to pulsed NIR wavelengths from nonlinear biopsies was considered. The derived model is unique because it assesses the risk of CPD related carcinogenesis due to both 2- and 3-photon effects.

To assess how effective NIR femto-second laser pulses are at inducing carcinogenic DNA lesions, the authors compared the levels of DNA mutations (CPDs) induced in chinese hamster ovary (CHO) cells in vitro by pulsed NIR from NLO imaging with those induced by regular CW UV.

The newly derived risk model indicated that the increase in CPD-induced SCC risk from NLO biopsy is negligible above that from regular exposure to UV radiation in sunlight. The relative risk from 40 or more nonlinear biopsies over is notably higher, but this increase is still lower than the risk arising from sunbathing or having an outdoor profession.

However, it has to be considered that the risk could become significant if the NLO biopsies are performed without discretion, i.e. by using unnecessarily high energy fluence for imaging, performing too many scans over the same tissue site or carrying out excessive NLO biopsies. The authors conclude that it is necessary to delineate an efficient protocol for NLO biopsy in the clinic to ensure its efficacy as a diagnostic tool and also minimize possible long-term effects.