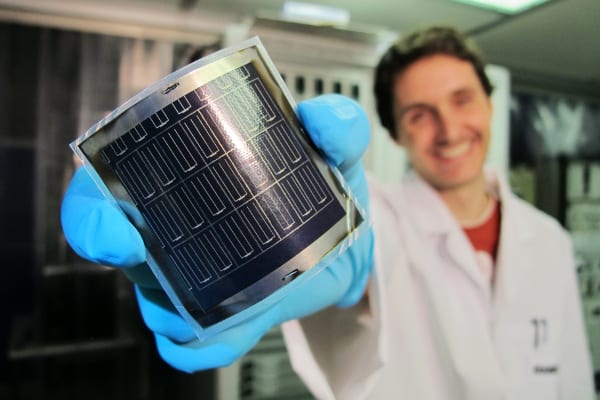 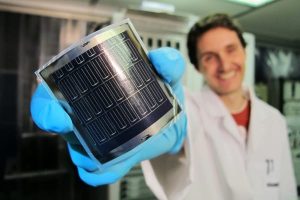 Scientists at Empa, the Swiss Federal Laboratories for Materials Science and Technology, have developed thin film solar cells on flexible polymer foils with a new record efficiency of 20.4% for converting sunlight into electricity. The cells are based on CIGS semiconducting material (copper indium gallium (di)selenide) known for its potential to provide cost-effective solar electricity. The technology is currently awaiting scale-up for industrial applications.

To make solar electricity affordable on a large scale, scientists and engineers the world over have long been trying to develop a low-cost solar cell, which is both highly efficient and easy to manufacture with high throughput. Now a team at Empa’s Laboratory for Thin Film and Photovoltaics, led by Ayodhya N. Tiwari, has made (yet another) leap ahead. They achieved a record 20.4% energy conversion efficiency for thin film CIGS solar cells on flexible polymer substrates, a massive improvement over the previous record of 18.7% achieved by the same team in May 2011. Tiwari’s team has been investigating and developing various thin film solar cell technologies for some time. Over the years the laboratory has boosted the photovoltaic conversion efficiency of flexible CIGS solar cells time and again, from 12.8% in 1999 – the group’s first world record – to 14.1% in 2005, 17.6% in 2010 and 18.7% in 2011.

The latest in the series of records has been achieved, thanks to innovative ideas and excellent team work in the lab, especially by PhD students Adrian Chirila and Fabian Pianezzi. The team has succeeded in modifying the properties of the CIGS layer, grown at low temperatures, which absorbs light and contributes to the photo-current in solar cells. The cell efficiency value was independently certified by the Fraunhofer Institute for Solar Energy Systems (ISE) in Freiburg, Germany. What’s more, Empa’s new record efficiency for flexible solar cells now even exceeds the record value of 20.3% for CIGS solar cells on glass substrates – and equals the highest efficiencies for polycrystalline silicon wafer-based solar cells. “We have now – finally – managed to close the “efficiency gap” to solar cells based on polycrystalline silicon wafers or CIGS thin film cells on glass”, says Tiwari.

Thin film, lightweight and flexible high-performance solar modules are attractive for numerous applications such as solar farms, roofs and facades of buildings, automobiles and portable electronics and can be produced using continuous roll-to-roll manufacturing processes that offer further cost reductions compared to standard silicon technologies. In other words, they have the potential to enable low-cost solar electricity in the near future. “The series of record efficiencies for flexible CIGS solar cells developed at Empa demonstrates that thin film solar cells can match the excellent performance of polycrystalline silicon cells. Now it is time for the next step, the scale-up of the technology to cover large areas in a cost-efficient roll-to-roll manufacturing process with an industrial partner”, says Gian-Luca Bona the Director of Empa. For this purpose, Empa is collaborating with Flisom, a start-up company involved in industrialization of flexible CIGS solar cells.