Urbanization is threatening global water supplies, but finding a way to balance expansion with sustainable water management between nature, people, and the city water infrastructure. 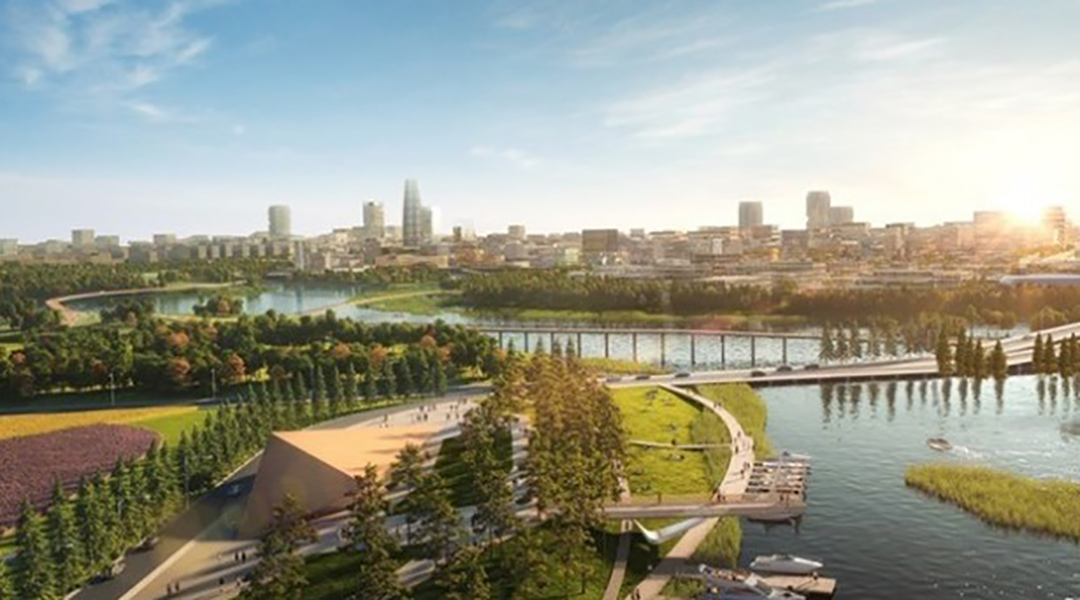 Water is fundamental to any natural system. Even within our built environment, without water one can hardly imagine its functioning. Unfortunately, strain is being put on our water resources as the demand for water has been steadily increasing with an exploding global population. However, the problem becomes even more complex as global population density is not evenly distributed and water demand therefore varies with geography. With four billion people already living in urban areas and the overwhelming activities that infringe on natural water resources, water ecosystem health and biodiversity have plummeted, drastically reducing available global water resources.

Countries like China, for example, which has the largest global population at 1.4 billion, demands clean water supply not only for health and sanitation, but also for increased irrigation for farming, hydropower generation, industrial growth, and daily household use.

While demands increase, water security in China is threatened by both overuse and pollution. Unprecedented increases in the demand for clean water over the past two decades can be seen most prominently in the drier northern regions of China due to factors such as increased urbanization.

Urban agglomeration is the continuous urban spread, constituting a town and its adjoining outgrowths. This includes growing residential areas as well as industrial clusters, and in northern China, this has become a major driver of water overuse.

For example, the water demand in the Beijing-Tianjin-Hebei (BTH) urban agglomeration has increased from 9 to 14% between 1997 and 2016, destabilizing the city’s equitable water distribution in that time. A growing number of irrigated lands, textile, and pharmaceutical industries release nitrogen, phosphorous, heavy metals, and organic pollutants into the city’s waterways and cause surface water eutrophication and groundwater pollution. Eutrophication can inflict damage to water supplies, fisheries, transportation, and tourism, and can cause other economic losses.

Drinking water treatment processes are challenged by persistent organic pollutants from industrial, municipal, and agricultural sources. For example, crop production in BTH has risen 6.6-fold between 1960 and 2000, causing a 70% increase in the groundwater withdrawal, deepening of the groundwater level as high as 12 m, which critically threatens groundwater dependent ecosystems. In the meantime, regional climate change only amplifies the condition.

Hence, meeting these water demands, both in quantity and quality, of urban clusters is a major challenge in generating sustainable cities with a growing global population. In a recent article published in the journal WIREs Water, researchers outline that one solution is to conceptualize the use of healthy waterways and ecologically sustainable cities in cases of urban agglomeration.

Ecologically sustainable cities connect urban clusters with green spaces. Studies have already shown the benefits of these initiatives, as increased interaction with nature promotes health and wellbeing. Innovative use of sustainability also helps build resilient urban centers that can balance the disturbance of water resources caused by both direct human activity and climate change.

While beneficial and an admirable idea, a number of large cities, especially those in drier regions of the world such as BTH, have been facing growing challenges when it comes to the development of healthy waterways and building a “sustainable city”. The foremost challenge is securing the city’s water supply system while meeting water sustainably goals. Securing water supply sources sustainably should therefore be the primary goal.

In the case of BTH, Baiyangdian lake is an important water delivery source for the Xiong’an New Area. Maintaining the integrity of water in Baiyangdian lake, including its groundwater resources in the watershed, is essential for future sustainability of Xiong’an. However, recent environmental changes (drought, floods, and increased land use) have caused serious implications for BTH.

In this vein, Xiong’an New Area should be established as a green eco-city that has balance (as much as possible) between nature, people, and the city’s water infrastructure. For this, improved water governance is needed including clearly legislated frameworks for water allocation, strong enforcement, and satisfactory implementation of integrated water resources management.

In BTH, and many other cities around the globe for that matter, there is inefficient water governance related to limited collaboration between water management authorities and other governmental and non-governmental agencies both at regional and local scales.

Knowledge sharing between scientific and non-scientific members of the community as well as coordination between stakeholders has also contributed to the current water resource management crisis in Xiongan and other cities. Regular communication between scientists and water resource managers can strengthen the relative importance of science in water governance and help improve networking and communications across central to local governments on water marketing and reforms.

Evidence-based research is essential in tackling water related crisis as it can help determine viable and logical solutions to water security issues through the monitoring of rapidly changing water resources while assisting in urban planning and water policy reforms. A coordinated effort made by universities, research organizations, as well as government and non-governmental organizations can help identify and plan for foreseeable disasters and possibly help prevent them through developing adaptation strategies.

Building cities that help mitigate the challenges of the global water crisis will not be easy as a growing population and a changing global climate present world leaders and scientists with a unique and formidable task. However, we are nearing a tipping point where if we do not act on the issues currently being faced, then their consequences will only become more severe. Tackling water management and striving for sustainable water in growing urban agglomerations is an urgent matter that we have no choice but urgently to address.