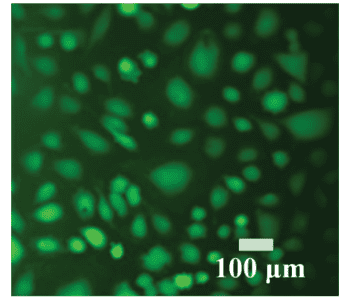 Researchers from China, Germany, and the USA have developed a surface, which facilitates growth and proliferation of model endothelial cells. The surface consists of polycarbonate urethane (PCU) coated with zwitterionic polynorbornene poly-(NSulfoZI). With this coating, the surface is hydrophilic and cytocompatible. Cells that are cultivated on the surface for seven days show high viability. Thus, it is a promising candidate for tissue engineering applications.

Elastomeric properties make PCU a favorable component of biomaterials. Endothelial cells are, however, not able to grow on hydrophobic, bioinert PCU surfaces. Attaching hydrophilic poly-(NSulfoZI) to PCU resolves this problem, since its zwitterionic structure resembles natural functional groups such as phosphatidylcholines in mammalian cell membranes. The zwitterionic surface prevents nonspecific protein adsorption and fouling. These properties all contribute to the material’s suitability for cell culture.

Poly-(NSulfoZI) is attached to PCU with thiol-ene click-chemistry with very mild experimental conditions. First, isocyanate groups are introduced to the PCU surface, which are then used to attach thiol-bearing linkers. Finally, the zwitterionic polymer is attached to these thiol linkers via click-chemistry. When cysteine is used as a linker, and thus toxic reagents are avoided, the highest cell viability is achieved.