Cause of LED "droop" identified 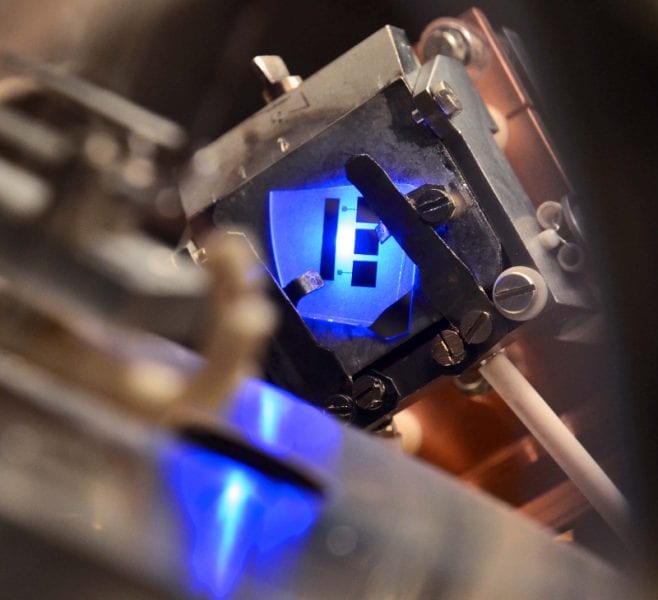 Researchers at University of California, Santa Barbara, in collaboration with colleagues at CNRS-École Polytechnique in France, have conclusively identified Auger recombination as the mechanism that causes light emitting diodes (LEDs) to be less efficient at high drive currents.

Until now, scientists had only theorized the cause behind the phenomenon known as LED “droop”—a mysterious drop in the light produced when a higher current is applied. The cost per lumen of LEDs has held the technology back as a viable replacement for incandescent bulbs for all-purpose commercial and residential lighting.

This could all change now that the cause of LED efficiency droop has been explained, according to researchers James Speck and Claude Weisbuch of the Center for Energy Efficient Materials at UCSB, an Energy Frontier Research Center sponsored by the U.S. Department of Energy.

Knowledge gained from this study is expected to result in new ways to design LEDs that will have significantly higher light emission efficiencies. LEDs have enormous potential for providing long-lived high quality efficient sources of lighting for residential and commercial applications. The U.S. Department of Energy recently estimated that the widespread replacement of incandescent and fluorescent lights by LEDs in the U.S. could save electricity equal to the total output of fifty 1GW power plants.

“Rising to this potential has been contingent upon solving the puzzle of LED efficiency droop,” commented Speck, professor of Materials and the Seoul Optodevice Chair in Solid State Lighting at UCSB. “These findings will enable us to design LEDs that minimize the non-radiative recombination and produce higher light output.”

“This was a very complex experiment—one that illustrates the benefits of teamwork through both an international collaboration and a DOE Energy Frontier Research Center,” commented Weisbuch, distinguished professor of Materials at UCSB. Weisbuch, who is also a faculty member at the Laboratoire de Physique de la Matière Condensée, a CNRS lab at École Polytechnique near Paris, enlisted the support of his colleagues Lucio Martinelli and Jacques Peretti. UCSB graduate student Justin Iveland was a key member of the team working both at UCSB and École Polytechnique.

In 2011, UCSB professor Chris van de Walle and colleagues theorized that a complex non-radiative process known as Auger recombination was behind nitride semiconductor LED droop, whereby injected electrons lose energy to heat by collisions with other electrons rather than emitting light.

A definitive measurement of Auger recombination in LEDs has now been accomplished by Speck, Weisbuch, and their research team.

The experiment used an LED with a specially prepared surface that permitted the researchers to directly measure the energy spectrum of electrons emitted from the LED. The results unambiguously showed a signature of energetic electrons produced by the Auger process.

Hui-Ming Cheng on Supercapacitor Performance
Smart Ships on the Horizon
Micro- and nanofabrication of 2D and 3D metal structures
Magnesium Batteries: An Alternative to Lithium?