Casting light on a photocleavable monomer 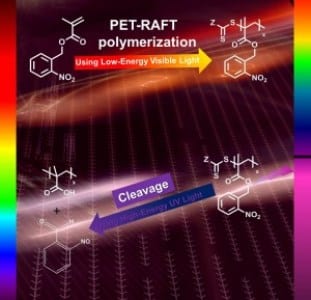 Recently, Prof. Cyrille Boyer and his group at the University of New South Wales in Australia have developed a benign synthesis route for a novel controlled polymerization known as photoinduced electron/energy transfer−reversible addition−fragmentation (PET-RAFT) polymerization. This technique is rapidly emerging as a promising tool in polymerizing a wide range of monomers using visible light and near Infrared (from 460 to 900 nm) in the presence of photocatalysts to prepare precise, controlled polymers. Using light to mediate the polymerization offers unique advantages over conventional polymerization methods by performing the reaction at room temperature and avoiding side reactions.  Additionally, light as a spatially and temporally controllable external stimulus can be readily tuned and focused to trigger changes in the structure of polymer chains to provide “on-command” drug delivery. 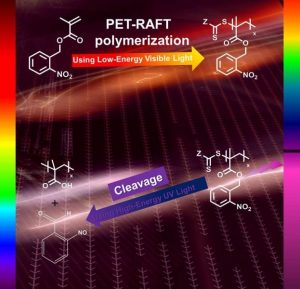