University of Michigan researchers develop focused ultrasound technique for use in microsurgery. 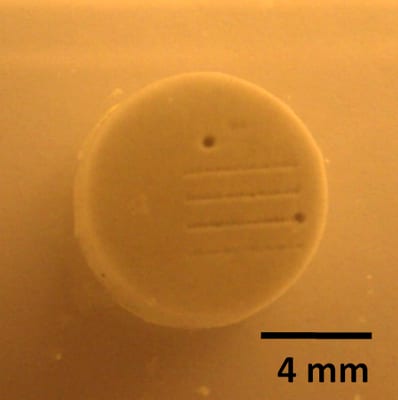 A carbon-nanotube-coated lens that converts light to sound can focus high-pressure sound waves to finer points than ever before. The University of Michigan engineering researchers who developed the new therapeutic ultrasound approach say it could lead to an invisible knife for noninvasive surgery.

Today’s ultrasound technology enables far more than glimpses into the womb. Doctors routinely use focused sound waves to blast apart kidney stones and prostate tumors, for example. The tools work primarily by focusing sound waves tightly enough to generate heat, says Jay Guo, a professor of electrical engineering and computer science, mechanical engineering, and macromolecular science and engineering. Guo is a co-author of a paper on the new technique published in the current issue of Nature’s journal Scientific Reports.

The beams that today’s technology produces can be unwieldy, says Hyoung Won Baac, a research fellow at Harvard Medical School who worked on this project as a doctoral student in Guo’s lab.

“A major drawback of current strongly focused ultrasound technology is a bulky focal spot, which is on the order of several millimeters,” Baac said. “A few centimeters is typical. Therefore, it can be difficult to treat tissue objects in a high-precision manner, for targeting delicate vasculature, thin tissue layer and cellular texture. We can enhance the focal accuracy 100-fold.”

The team was able to concentrate high-amplitude sound waves to a speck just 75 by 400 micrometers (a micrometer is one-thousandth of a millimeter). Their beam can blast and cut with pressure, rather than heat. Guo speculates that it might be able to operate painlessly because its beam is so finely focused it could avoid nerve fibers. The device hasn’t been tested in animals or humans yet, though.

“We believe this could be used as an invisible knife for noninvasive surgery,” Guo said. “Nothing pokes into your body, just the ultrasound beam. And it is so tightly focused, you can disrupt individual cells.”

To achieve this superfine beam, Guo’s team took an optoacoustic approach that converts light from a pulsed laser to high-amplitude sound waves through a specially designed lens. The general technique has been around since Thomas Edison’s time. It has advanced over the centuries, but for medical applications today, the process doesn’t normally generate a sound signal strong enough to be useful.

The U-M researchers’ system is unique because it performs three functions: it converts the light to sound, focuses it to a tiny spot and amplifies the sound waves. To achieve the amplification, the researchers coated their lens with a layer of carbon nanotubes and a layer of a rubbery material called polydimethylsiloxane. The carbon nanotube layer absorbs the light and generates heat from it. Then the rubbery layer, which expands when exposed to heat, drastically boosts the signal by the rapid thermal expansion.

The resulting sound waves are 10,000 times higher frequency than humans can hear. They work in tissues by creating shockwaves and microbubbles that exert pressure toward the target, which Guo envisions could be tiny cancerous tumors, artery-clogging plaques or single cells to deliver drugs. The technique might also have applications in cosmetic surgery.

In experiments, the researchers demonstrated micro ultrasonic surgery, accurately detaching a single ovarian cancer cell and blasting a hole less than 150 micrometers in an artificial kidney stone in less than a minute.

“This is just the beginning,” Guo said. “This work opens a way to probe cells or tissues in much smaller scale.”

The researchers will present the work at the SPIE Photonics West meeting in San Francisco. The research was funded by the National Science Foundation and the National Institutes of Health.