New immobilization method from the Chinese Academy of Sciences will improve cancer detection and treatment. 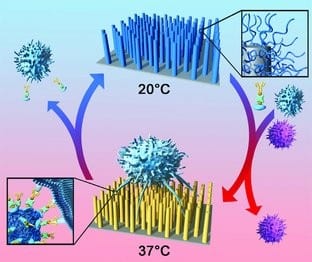 To detect and isolate circulating tumor cells (CTCs) is of some importance, as CTCs can provide key information to help understand the mechanism of cancer metastasis and monitor the therapeutic response of cancer patients. However, CTCs are extremely rare – no more than a few hundred per milliliter of blood, which also contains a large number of hematologic cells (109 mL-1). This makes their detection and isolation a big challenge.

Several approaches for identifying and isolating CTCs have been developed with some success, including the FDA-approved CellSearch system, cell size-based mechanical separation, epithelial-cell adhesion-molecule antibody (anti-EpCAM) coated microstructured CTC-chips, and nanometer scaled substrates. However, the current technologies are mainly focused on improving the enrichment efficiency of CTCs. To unveil the mystery of cancer metastasis and achieve better treatment of cancer,we need to obtain live and undamaged CTCs for subsequent cellular analysis. Now, Shutao Wang and colleagues at Institute of Chemistry, Chinese Academy of Sciences have created a new smart material, which can easily capture and release cancer cells on demand.

The researchers synthesized a new kind of smart biointerface, wherein a specific cell capture agent was immobilized onto a poly(N-isopropylacrylamide) (PNIPAAm) brush modified aligned silicon-nanopillar (SiNP) array via weak hydrophobic interaction. Under physiological temperature, target cancer cells were specifically captured onto the surface owing to the recognition between cell capture agents and target cells. When the temperature was reduced to room temperature, the surface becomes cell-repellent due to the hydrophilic nature of the PNIPAAm modified surface, thereby releasing the captured cells.

Furthermore, topographical interactions between the nanostructured SiNP array and the cell protrusions provides a three-dimensional (3D) contact model, which greatly enhances the cell capture efficiency. This 3D contact also prevents the spreading of the captured cells and decrease the contact area between the nanostructured surface and cells, thereby facilitating the cell release when decreasing temperature. The capture and release of cancer cells can be switched by just alternating the temperature, avoiding the need to destroy these rare cancer cells, in contrast to the previous method of emzyme-cleaving proteins on cell membranes – the viability of the captured and released cells was above 95% in both cases.