Cancer immunotherapy gets a boost from microbubbles

A fragile cancer immunotherapy agent "cGAMP" is delivered to tumor sites using tiny bubbles that protect it until it reaches its destination. 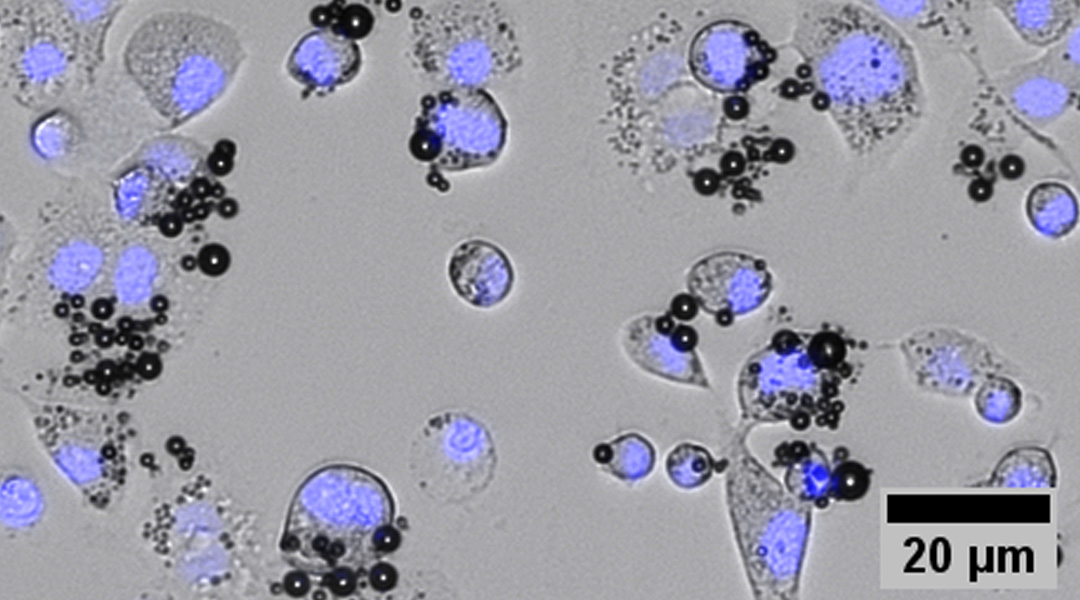 During the last decade, great advances in cancer therapies have been achieved. The development of immunotherapy shows great clinical results, but unfortunately it doesn’t work in every patient. Now, scientists have developed a technique with the potential to improve the performance of current immunotherapies.

Immunotherapy consists of tricking the patient’s own immune cells to make them kill the cancerous cells. One of the strategies most used to date is the immune checkpoint blockade, meaning that signaling pathways that normally inhibit the immune response are blocked, allowing immune cells to keep active and able to fight the cancer. PD1 blockade therapy is a great example of this, and while it shows a good performance when treating people with cancer, in some cases it doesn’t produce a durable response.

One way to improve the efficacy of this therapy is to combine it with other medicines that work through complementary mechanisms. One obvious class of candidates for PD1 blockade therapy, activate the innate immune system exclusively at the tumor site. Work recently published in the journal Nature Nanotechnology reported on this type of approach with a strategy that uses microbubbles and ultrasound for the delivery of an innate immune system activator.

The “stimulator of interferon genes”, or STING, is a promising target for immunotherapy since it’s an activator of the innate immune system. This cytoplasmatic protein has a natural activator, the cyclic GMP-AMP, or cGAMP, that turns on the immune response when it binds to STING.

“Pharmaceutical companies are investing billions of dollars studying STING as a potential therapeutic target for cancer,” said Wen Jiang, assistant professor at the Department of Radiation Oncology in The University of Texas MD Anderson Cancer Center in Houston, TX, USA, and corresponding author of the article. “We already know the best STING activator, cGAMP, but we face a delivery problem.”

The molecule cGAMP could be a great therapeutic drug since it has a great potency activating STING and it lacks toxicity issues. “The problem with cGAMP is that it’s rapidly degraded, it doesn’t penetrate the plasma membrane efficiently to go into the cell and activate the innate sensor, STING,” said Jiang.

At the same time, a broad STING activation in the body may cause serious inflammatory responses. A method that delivers cGAMP specifically to a predefined place (the tumor), ensures its stability until it reaches the target cells and provides cross-membrane transportation, is needed.

The research team came up with a delivery platform to facilitate cGAMP delivery into immune cells in a tumor called “microbubble-assisted ultrasound-guided immunotherapy of cancer,” or MUSIC.

“We felt there was an opportunity to use microbubbles to develop a strategy that allows the delivery of cGAMP in a cellular targeted manner more efficiently,” said Jiang. “With MUSIC, we overcome the cGAMP delivery limitations.”

How does MUSIC work?

“You can imagine microbubbles like soap bubbles that you’d blow as a kid, with a similar shape but about 100 time smaller that a thread of hair,” said Jacques Lux, assistant professor at the Translational Research in Ultrasound Theranostics (TRUST) Program, Department of Radiology, The University of Texas Southwestern Medical Center in Dallas, TX, USA, and lead author of the study. “These bubbles are composed of a core of inert gas, and a shell of phospholipids — similar to the lipid nanoparticles used in mRNA COVID-19 vaccines — that constrains the gas inside.”

In this work, microbubbles were coated with cGAMP molecules and a CD11b antibody to guide them to specific immune cells. Later, the coated microbubbles were injected into tumors in mice and “activated” with ultrasound.

“When using an ultrasound scanner, we generate an acoustic field that makes the microbubbles oscillate,” said Lux. “This oscillation produces a constant compression and expansion of the microbubbles generating transient pores in the cell membranes — it opens up the door for the delivery of therapeutics inside the cells.”

With this technology, cGAMP enters into the cytoplasm of specific immune cells — CD11b positive cells — and activates STING, starting an immune response in the tumor.

“Our MUSIC platform has two main advantages: the ultrasound activation that allows a therapeutic delivery on demand, and the use of CD11b antibodies that targets only the cells of interest — if there’s any microbubbles leakage after intratumoral injection, STING won’t be activated somewhere else outside the tumor,” said Lux.

The scientists tried the MUSIC platform in a mouse model of breast cancer and showed that it completely eradicated the tumor in six of the ten treated mice. Also, they showed that in a metastatic breast cancer model, the combination of MUSIC platform with a PD1 blockade therapy increased the mouse median survival by 76% compared to PD1 blockade alone.

“We anticipate the use of the MUSIC platform in the clinic as a short-term therapy,” said Jiang. “We think it will efficiently prime the body’s immune system to generate a more potent intratumor immune response in cases where the tumor otherwise would be more resistant to conventional immunotherapy — once the body’s immune response is primed with MUSIC, the tumor becomes more responsive to other immunotherapy given down the road.”

The authors explain that the MUSIC platform could be easily applicable in the clinic since ultrasound devices are a common equipment in health centers. For example, ultrasound scanners are currently being used for the delivery of chemotherapy drugs.

“We proved that the MUSIC platform works on breast cancer models, but we are also looking at other cancer,” said Jiang. “The only restriction of MUSIC platform is that the tumor needs to be at a place reachable with ultrasound to activate the microbubbles. We think there’s also a potential of MUSIC for melanoma, liver or colorectal cancer,” added Jiang.