New design in lithium-air battery aims to get more electric vehicles on the road. 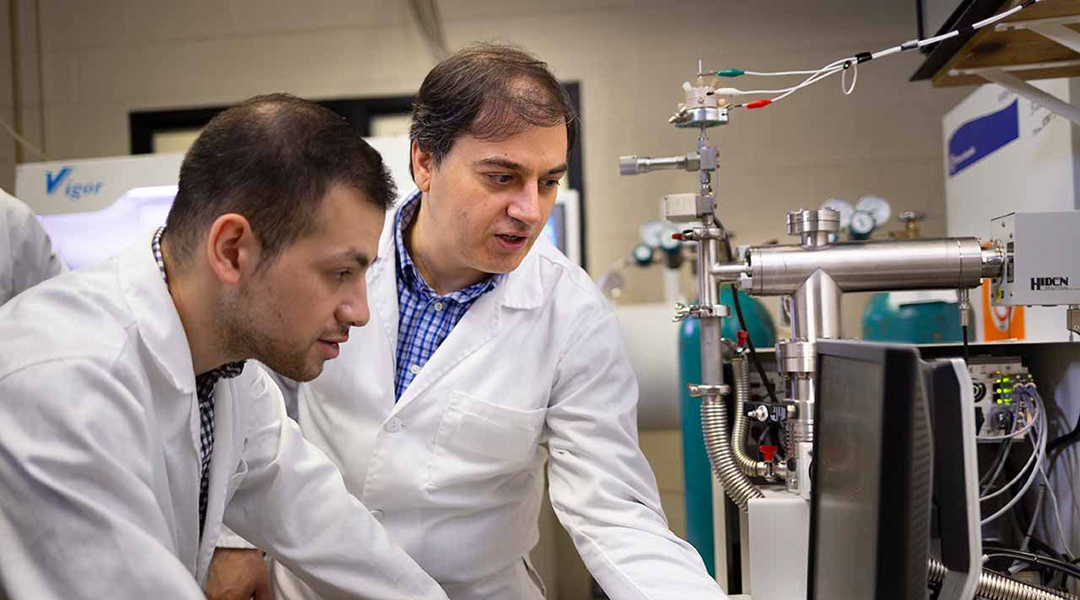 Lithium-air batteries hold more energy in a smaller battery size than their more common counterpart, the lithium-ion battery. Illinois Institute of Technology Assistant Professor of Chemical Engineering Mohammad Asadi has led the development of a breakthrough design that may finally lead lithium-air batteries to commercial success, with the hope of putting more electric vehicles on the road and reducing carbon emissions.

After almost a decade working in the oil and gas industry, Asadi became concerned about carbon dioxide in the atmosphere and sustainability. Transportation uses the most carbon-based fuel in the United States and consumes “around 38-40% of the world’s energy,” said Asadi.

“My first thought was that electricity would be the best way to switch,” said Asadi, “because at least you can use fossil fuels in localized locations and then transport electricity and electrify everything, so at least you will not have the release of other impurities in a different region of the environment, you’ll have a controlled region.”

Plus eventually, electric vehicles could charge up using clean energy sources, drastically reducing these emissions. But in order to electrify transportation, we need batteries — lots of them. Right now lithium-ion batteries are the go-to type, but lithium-air batteries have some huge advantages.

“Imagine you have an electrical vehicle today that can run only 300 miles on a single charge,” said Asadi. “If you replace that technology, which is based on the lithium-ion battery, with our technology, the lithium-air battery technology, you can drive up to 1,500 to 2,000 miles. So it’s increasing the driving range about five to six times at the same weight and same volume.”

But while scientists have known for a few decades that lithium-air batteries have this potential, the design has consistently been overlooked for commercial applications in favor of lithium-ion batteries because of a few outstanding problems: lithium-air batteries tended to die after fewer recharges and they’ve had a lower efficiency, requiring a lot more energy to charge them than can be generated by the battery later. Asadi has developed solutions improving both of these problems.

The number of times a battery can recharge is called its cycle life, and it’s the involvement of air in the lithium-air battery that has made it difficult to get a long cycle life. What the battery really needs to power up is a chemical reaction between oxygen and lithium that happens at the part of the battery called the cathode, the negatively charged component inside the battery.

While the air in our environment has plenty of oxygen, it also contains other things like carbon monoxide, nitrogen, and water that can react with lithium inside the battery and gum up the system, preventing oxygen from reaching the cathode, which in turn prevents the chemical reaction that makes the battery run. It also uses up the lithium, making less of it available for reactions with oxygen.

As reported in Nature in 2018 and Advanced Materials in 2020, Asadi contributed to the development of a unique combination of internal battery components that allow lithium and oxygen to react with minimal interference.

“We can make the chemistry of the cathode only favorable for oxygen reduction and degeneration reaction and bypass the formation of other products that can decrease the efficiency of the process over the cycling,” says Asadi. “And we have developed a very particular, very novel hybrid electrolyte that can work together to absorb those impurities.”

Since the positive side of the battery, the anode, is just made of lithium, the design protects that with a coating of lithium carbonate that acts as a filter blocking out everything except the lithium ions that come and go as the battery charges as discharges.

They also designed a specific mixture for the electrolyte, the liquid that carries the lithium ions between the anode and cathode, that reduces the likelihood that the lithium will react with anything while it travels.

Once the lithium ions travel safely over from the anode to the cathode, the cathode material acts as a catalyst, encouraging the lithium to react with oxygen and causing the battery to produce energy. Creating this pathway has allowed Asadi to develop a lithium-air battery with a long cycle life, achieving 1,200 charges and discharges in his most recent design.

While many catalyst materials can be used for the cathode to speed up one of these reactions, it has been a challenge to find a material that can speed up both, which is what is needed for high efficiency.

In his most recent design, Asadi tested an inexpensive material called trimolybdenum phosphide nanocatalysts, which turned out to be able to efficiently drive both.

“Using our technology, we reach the lowest reported excess energy for this reaction, which also gives us negligible energy loss over the cycling,” said Asadi. “It’s the best lithium-air battery out there.”

While these advances represent a huge step forward for lithium-air batteries, Asadi says there simply isn’t enough lithium on earth to create the number of batteries we need for a fully electrified future. Lithium-air has the advantage of making more use of the lithium we do have than lithium-ion, but it’s likely still not enough. Fortunately, the basic battery design principles are translatable.

“We are working in that direction to replace the lithium with other materials, which are much more available than lithium, like sodium, magnesium, aluminum, and calcium, which are much more widely available, much more in abundance, to make the transition much more smoothly to scale up and reduce the price,” said Asadi. He thinks these other metals can be developed to create batteries with energy storage comparable to current lithium batteries.