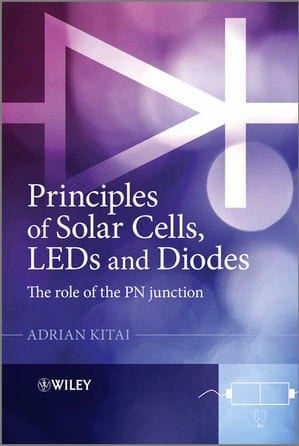 Principles of Solar Cells, LEDs and Diodes: The role of the PN junction

From the reciprocity of the action it is clear: a solar cell, where light is converted into electric power, should be likened to a light-emitting diode, where electric power is converted into light. Both types of devices are made from semiconductors, in particular semiconductor diodes, and therefore the logic of Adrian Kitai’s book is straightforward: Giving a consistent overview of semiconductor physics, the physics of pn junction diodes and the physics of quantum transitions in solids.

These subjects are treated in a well written and clear manner being instructive for undergraduate students but being also enjoyable for scientists. Several deductions are given where other books of similar level give only the results. For instance the reader will enjoy a simple deduction of the Fermi-Dirac distribution which describes the behaviour of electrons in a solid, or of the diode equation by simply integrating the continuity equation, which is possible at least in special cases. Or the reader may find the derivation of the charge transport across a metal semiconductor interface.

Certainly, the highlight of the book is the section about the photon emission and absorption processes. Using simple arguments and a minimum of quantum mechanics, Adrian Kitai explains the electron transition process between 2 quantum states by referring to the acceleration of charges and thereby gives a plausible argument for the release of a coherent electromagnetic wave within a time interval of 8-10 seconds. Other deductions are rather standard, as the Kronig-Penney model or the density of states, but are useful in the context of the book as some important conclusions are drawn.

The book gives an overview about the most relevant materials and device processes for solar cells and LEDs. A nice introduction in the physics of organic materials guides the reader into a relatively novel field which is highly researched in these days but which still awaiting maturity. Adrian Kitai explains the similarities and the dissimilarities between inorganic and organic materials.

Possibly due to the targeted undergraduate students some more advanced aspects of higher complexity are left out. For instance one may miss concepts for next generation solar cells beyond the Shockley-Queisser-Limit or some theoretical aspects combining the action of solar cells and LEDs, namely the reciprocity theorem of charge collection. Nevertheless, I can recommend this book in particular for the targeted community.