Antonio Facchetti reviews the first edition of the Handbook of Organic Materials for Optical and (Opto)Electronic Devices. 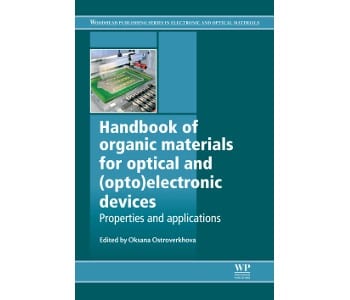 Optoelectronic devices based on organic small molecule and polymeric semiconductors are important for the development of our understanding of how charge and/or light interact with molecular solids as well as enabling new exciting products. Among the latter applications, one can consider flexible displays, bright/ultra-high definition displays, printed circuits and sensors, ultra-light solar modules, or inexpensive electro-optic modulators.

This book consists of 25 chapters within 3 Sections and begins with a brief Preface by the Editor, Oksana Ostroverkhova, summarizing the motivations and scopes of this book. The Part 1, entitled “MATERIALS FOR ORGANIC (OPTO)ELECTRONICS AND NONLINEAR OPTICS STRUCTURE-PROPERTY RELATIONS” provides a general introduction and several molecular structure of organic semiconductors as well as providing information of typical structure-property relationships. In this section there are six chapters. Chapter 1 describes several families of molecular semiconductors for electrophotography, light e-emitting diodes, and bulk-heterojunction solar cells. The chemical structures are described in details along with several performance parameters in the corresponding devices.

Chapter 2 describes techniques to fabricate thin films of organic semiconductors, particularly for thin-film transistors, and the key role of the film morphology. The chapter is nicely written, however, it would have been nice that a corresponding chapter describing chemical structures for transistors been provided as the structural requirements for OLEDs and OTFTs are very different. Chapter 3 reviews basic concepts and recent achievements in molecular doping, particularly for films processed from the vapor phase. Several examples of application in OLEDs are described.

Chapters 4 to 6 discuss non-linear optical materials and properties, with the first two focusing on third-order phenomena and the last on second-order processes. For these chapters I enjoyed the mix of describing both small molecules and polymers and what are the advantage of each structures. Also, it is well described what are the requirements to translate large non-linear optical parameters from the isolate (macro)molecule/solution to the solid-state/bulk.

In Part 2, entitled “(OPTO)ELECTRONIC AND NONLINEAR OPTICAL PROPERTIES OF ORGANIC MATERIALS AND THEIR CHARACTERIZATION” provides more details of the Physics behind charge transport and light absorption/generation in organic semiconductors. Thus, in Chapter 7 Sancho-Garcia describes transport mechanisms at the molecular level and theoretical tools to predict and rationalize them. In the following Chapter (Chapter 8) a discussion of the optical properties of molecules/solids is provided and what tools are used to monitor and understand exitonic processes. Chapter 9 describes basic concepts of NLO and, in part it overlaps with Chapters 4-6.

Chapters 10 to 12 describes ultrafast exciton dynamics in pure polymers and in polymer belnds (10-11) as well as in molecular crystals (12). Next, Chapter 13 and 15 summarizes methodologies and devices to extract charge transport parameters in thin films. Thus, field-effect, space-charge-limited current, time-of-flight, and xerographic discharge measurements are explained and summarized. Finally, Chapters 15 and 16 described spectroscopic analytical tools to characterize molecules/this-films at surfaces as well as their interactions. Thus, the basic principles of surface enhanced Raman scattering (Chapter 15) and second-harmonic generation and hyper-Rayleigh scattering (Chapter 16) are described.

Part III, entitled “APPLICATIONS OF (OPTO)ELECTRONIC AND NONLINEAR OPTICAL ORGANIC MATERIALS IN DEVICES” dives more into applications and structural details of the devices enabling them. Thus Chapter 17 summarizes structure, requirements, and operation of bulk-heterojunction organic solar cells. A few examples of OPV semiconductors are provided, however, what is described the best are relevant fabrication processes particularly by roll-to-roll printing. In Chapter 18 basic of OLEDs and several materials parameters are summarized. Very important, the mechanisms of device degradation are included, which I find it very useful. Chapter 19 describes organic spintronics, a quite new field, particularly describing the response of semiconducting polymers. Thus magnetic field effects are explained and described in OLED and organic spin valves. Details of the experimental setups to carry out these measurements are provided. Chapter 20 describes organic semiconductors for sensor applications. The devices utilized are based on the FET structure and details of the sensitivity and selectivity on the base of the semiconductor structure are provided. On the same wave, but different focus is Chapter 21 which summarizes FETs for applications in bioelectronics.

Chapter 22 explains basic concepts and operation of organic memories, both volatile and non-volatile. Furthermore, it focusses on particular example of memory devices where organic materials have been used with the greatest success. Chapter 23 describes semiconducting nanoparticles for photoelectrochemical photocurrent switching effect and their applications in simple logic gates and devices. Chapter 24 deals with fundamental of photorefractivity and the design of PR polymer composites. Furthermore applications are described including in recording and displays. Finally, the extended Chapter 25 summarizes requirements of polymers for passive waveguide operations and modulators. Well explained are processes for the fabrication of these devices.

Overall this book is well-organized, and the individual Chapters have been written by leading scientists in each area of experise. The Editor has coordinated the large amount of information effectively. I do really appreciate the good balance between discussing introductory versus advanced topics, scientific versus technological/application issues, and materials versus device structure/applications. I am surprised with the lack, in Part I, of a Chapter dedicated to materials design for transistors and in Part III organic circuits, although the memory and logic chapters are really good. Some parts are redundant, particularly basic concepts of nonlinearities. Nevertheless, this excellent book should be brought to the attention of graduate students as well as industrial and academic researchers interested in organic electronics. It will also provide stimulating ideas for open-minded chemists, physicists, material scientists, and electrical engineers seeking new opportunities in this exciting R&D area. Buy it!