Solar cells created by laboratories at Rice and Pennsylvania State universities could open the door to research on a new class of solar energy devices. 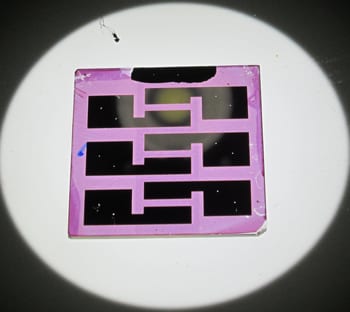 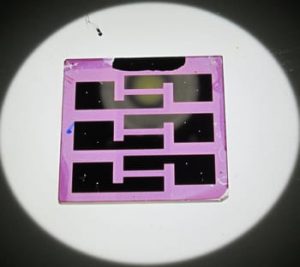 A new version of solar cells created by laboratories at Rice and Pennsylvania State universities could open the door to research on a new class of solar energy devices.

The photovoltaic devices created in a project led by Rice chemical engineer Rafael Verduzco and Penn State chemical engineer Enrique Gomez are based on block copolymers, self-assembling organic materials that arrange themselves into distinct layers. They easily outperform other cells with polymer compounds as active elements.

While commercial, silicon-based solar cells turn about 20 percent of sunlight into electricity and experimental units top 25 percent, there’s been an undercurrent of research into polymer-based cells that could greatly reduce the cost of solar energy, Verduzco said. The Rice/Penn State cells reach about 3 percent efficiency, but that’s surprisingly better than other labs have achieved using polymer compounds.

“You need two components in a solar cell: one to carry (negative) electrons, the other to carry positive charges,” Verduzco said. The imbalance between the two prompted by the input of energy – sunlight – creates useful current.

Since the mid-1980s, researchers have experimented with stacking or mixing polymer components with limited success, Verduzco said. Later polymer/fullerene mixtures topped 10 percent efficiency, but the fullerenes – in this case, enhanced C-60 buckyballs – are difficult to work with, he said.

The Rice lab discovered a block copolymer — P3HT-b-PFTBT — that separates into bands that are about 16 nanometers wide. More interesting to the researchers was the polymers’ natural tendency to form bands perpendicular to the glass. The copolymer was created in the presence of a glass/indium tin oxide (ITO) top layer at a modest 165 degrees Celsius.

With a layer of aluminum on the other side of the device constructed by the Penn State team, the polymer bands stretched from the top to bottom electrodes and provided a clear path for electrons to flow.

Mysteries remain, he said. “It’s not clear why the copolymer organizes itself perpendicular to the electrodes,” he said. “Our hypothesis is that both polymers want to be in contact with the ITO-coated glass. We think that forces this orientation, though we haven’t proven it yet.”

He said the researchers want to experiment with other block copolymers and learn to control their structures to increase the solar cell’s ability to capture photons and turn them into electricity. Once they have achieved higher performance from the cells, the team will look at long-term use.

“We’ll focus on performance first, because if we can’t get it high enough, there’s no reason to address some of the other challenges like stability,” Verduzco said. Encapsulating a solar cell to keep air and water from degrading it is easy, he said, but protecting it from ultraviolet degradation over time is hard. “You have to expose it to sunlight. That you can’t avoid.”