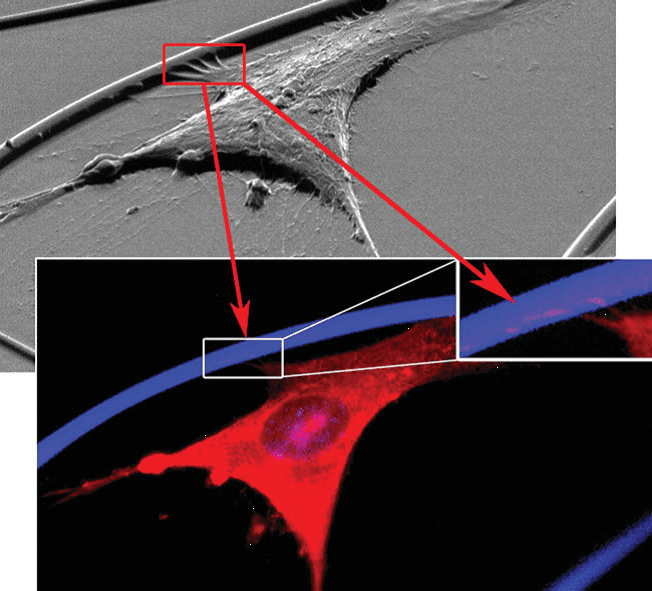 Tissue engineers aim for individual and functional tissue substitutes. Ensuring vitality is of critical importance: the substitute should integrate into the surrounding tissue and feature the tissue’s normal biological functionalities; that is, it should be able to grow and regenerate along with the natural tissue. Usually, the artificial tissue is generated in vitro, being implanted into the patient at a later stage.

Biomimetic scaffolds for cellular growth need to be enzyme-degradable and biocompatible, but water-resistant at the same time to prevent a decrease in the scaffold strength due to random hydrolysis.They have to efficiently mimic the extracellular matrix in order to favor cell attachment and growth without inducing an immune response.

Although synthetic polymers like poly(lactic acid) (PLLA) are usually less immunogenic and more flexible than natural polymers, they often lack hydrophilicity and natural recognition sites. Native poly(g-glutamic acid) (g-PGA), a polyamino acid derived from microbial origin, is composed of D-and L-glutamic acid units. Its use is limited by its polyanionic nature and high water solubility, but it allows for facile modification of its chemical handles and conjugation of functional entities to the side-chains.

Researchers from Imperial College, London, have now developed a series of modified g-PGA polyester scaffolds for tissue engineering applications. They report that esterified g-PGA-Et, g-PGA-Pr, and g-PGA-Bn exhibit unique advantages over g-PGA in terms of water-resistance, cell adhesion, and cell viability. Biomimetic fibrous scaffolds with a 3D matrix architecture are produced by electrospinning of the biocompatible polymer to sub-micrometer fibers. It is observed that the esters of increasing hydrophobicity are water-resistant and non-cytotoxic, but g-PGA-Bn shows the best performance as far as cell adhesion and viability (without an increase in protein adsorption)are concerned.

The co-modification of g-PGA-Bn with an integrin-binding RGD peptide (GRGDY) provides a scaffold with similar potential as g-PGA-Bn. If the cells are pre-incubated with GRGDY, a decrease in cell adhesion is noticed for the g-PGA-Bn-GRGDY scaffolds only.

Therefore, the authors conclude that aromatic functionality plays a crucial role in the regulation of cell adhesion behavior and that the cell scaffold interactions are not essentially governed by RGD-binding integrins. In addition they successfully design and produce new scaffolds based on enzyme-degradable and non-cytotoxic g-PGA which support adhesion, differentiation, and proliferation of hMSCs (human mensenchymal stem cells) for tissue engineering purposes with an improved performance compared with conventional PLLA.