There is a growing body of evidence that a secondary structure of highly negatively charged proteins can play an important role in localizing calcium and phosphate ions to promote the formation of the HAp deposits. 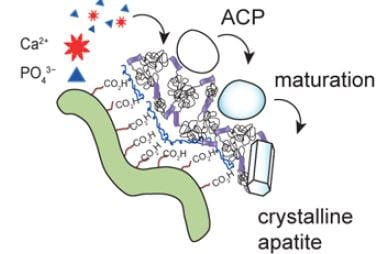 In nature, there are numerous examples of highly intricate organic and inorganic composite materials that are assembled by living organisms. One example of such a material synthesis is biomineralization, a process by which living organisms such as mollusks, coral, abalone, and bacteria produce deposits of minerals with complex composition and structure. 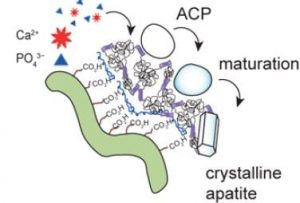 Biomineralization is of extreme importance in mammals and it is necessary for the formation of the skeleton. The mineral phase in bone is composed of a unique form of calcium and phosphate salt, referred to as biogenic hydroxyapatite (HAp), which is organized in a network made up of collagen. Although the formation of the these HAp deposits is a relatively routine process for bone-forming cells, our ability to replicate this the process of bone-mineral formation and organization is limited by the lack of information as to which proteins control this process and how this is done.

There is a growing body of evidence that a secondary structure of highly negatively charged proteins can play an important role in localizing calcium and phosphate ions to promote the formation of the HAp deposits. Using two proteins, phosvitin (Phov) and dentin matrix protein-1 (DMP-1), which are respectively found in chicken embryos and mammalian bones and teeth, the role of the distinct structures of these proteins in promoting the calcium phosphate mineral phase with characteristics similar to biogenic HAp was investigated by V. Prasad Shastri and co-workers in article number 1701629 in Advanced Materials.

Using a bioinspired approach, they assembled Phov and DMP-1 proteins in precisely defined conformations on a polymer matrix, and showed that the highly disordered structure of Phov and DMP-1 is very efficient in capturing calcium ions and promoting nucleation and growth of biogenic HAp.

This novel paradigm offers a unique avenue to engineering a biomaterial surface/interface to promote the formation of a bone-like mineral phase.