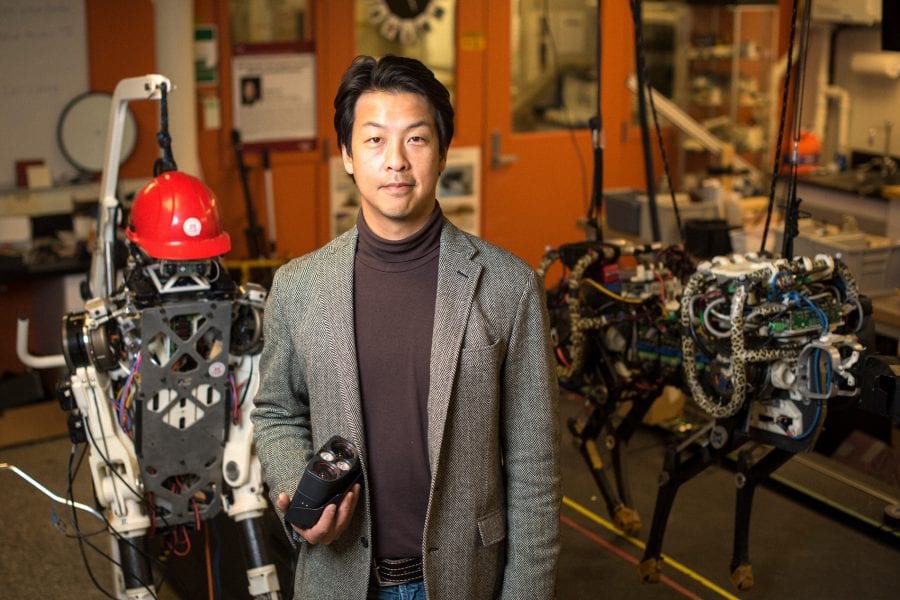 In the not so distant future, first responders to a disaster zone may include four-legged, dog-like robots that can bound through a fire or pick their way through a minefield, rising up on their hind legs to turn a hot door handle or punch through a wall.

Such robo-rescuers may be ready to deploy in the next five to 10 years, says Sangbae Kim, associate professor of mechanical engineering at MIT. He and his team in the Biomimetic Robotics Laboratory are working toward that goal, borrowing principles from biomechanics, human decision-making, and mechanical design to build a service robot that Kim says will eventually do “real, physical work,” such as opening doors, breaking through walls, or closing valves.

“Say there are toxic gases leaking in a building, and you need to close a valve inside, but it’s dangerous to send people in,” Kim says. “Now, there is no single robot that can do this kind of job. I want to create a robotic first responder that can potentially do more than a human and help in our lives.”

To do this, Kim, who was awarded tenure this year, is working to fuse the two main projects in his lab: the MIT Cheetah, a four-legged, 70-pound robot that runs and jumps over obstacles autonomously; and HERMES, a two-legged, tele-operated robot, whose movements and balance are controlled remotely by a human operator, much like a marionette.

“I imagine a robot that can do some physical, dynamic work,” Kim says. “Everybody is trying to find overlapping areas where you’re excited about what you’re working on, and it’s useful. A lot of people are excited to watch sports because when you watch someone moving explosively, it is hypothesized to trigger the brain’s ‘mirror neurons’ and you feel that excitement at the same time. For me, when my robots perform dynamically and balance, I get really excited. And that feeling has encouraged my research.” 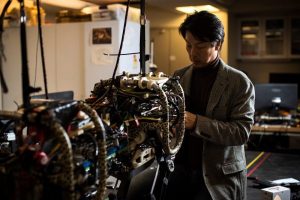 In 2009, Kim accepted an assistant professorship in MIT’s Department of Mechanical Engineering, where he established his Biomimetic Robotics Lab and set a specific research goal: to design and build a four-legged, cheetah-inspired robot.

“We chose the cheetah because it was the fastest of all land animals, so we learned its features the best, but there are many animals with similarities,” Kim says. “There are some subtle differences, but probably not ones that you can learn the design principles from.”

In fact, Kim quickly learned that in some cases, it may not be the best option to recreate certain animal behaviors in a robot.

“A good example in our case is the galloping gait,” Kim says. “It’s beautiful, and in a galloping horse, you hear a da-da-rump, da-da-rump. We were obsessed to recreate that. But it turns out galloping has very few advantages in the robotics world.”

Animals prefer specific gaits at a given speed due to a complex interaction of muscles, tendons, and bones. However, Kim found that the cheetah robot, powered with electric motors, exhibited very different kinetics from its animal counterpart. For example, with high-power motors, the robot was able to trot at a steady clip of 14 miles per hour – much faster than animals can trot in nature.

“We have to understand what is the governing principle that we need, and ask: Is that a constraint in biological systems, or can we realize it in an engineering domain?” Kim says. “There’s a complex process to find out useful principles overarching the differences between animals and machines. Sometimes obsessing over animal features and characteristics can hinder your progress in robotics.”

A portable spectrometer built using a "lab on a chip"
Indoor 5G gets a much-needed signal boost
Metamaterial Improves Solar Cells
What is the Internet of Things?