Micro-porous PEG hydrogels are functionalized with collagen type-I that has a selective response with human hepatocarcinoma cells. 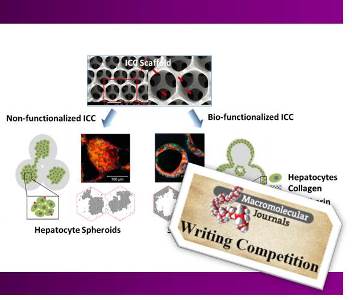 The human body is composed of several tissues, playing a specific role in our day-to-day life, e.g., tendon, a fibrous (protein) tissue that mechanically links the hard bone and soft muscle. Tissues have an intrinsic property of regeneration when they are damaged, lost, or diseased, however, they are unsuccessful to produce in a large volume. In view of this problem, tissue engineering (TE) or tissue regeneration has evolved as a fascinating and interdisciplinary area of research aimed at the development of damaged or diseased tissues. Tissues in general contain three major components, namely scaffold, cells and growth factors that are essential for tissue repair or regeneration. Therefore, it is very important to seed cells (cell growth) onto a scaffold that exactly mimics the native micro-environment of the tissue (i.e., extracellular matrix, ECM). Numerous efforts were made on to create such materials, and successfully, hydrogels (e.g., polyethylene glycol gels, PEG) have emerged as one of the widely employed biomaterials for TE application due to their potential to hold large amounts of water (like ECM) and their excellent resistance against the non-specific adsorption of proteins. 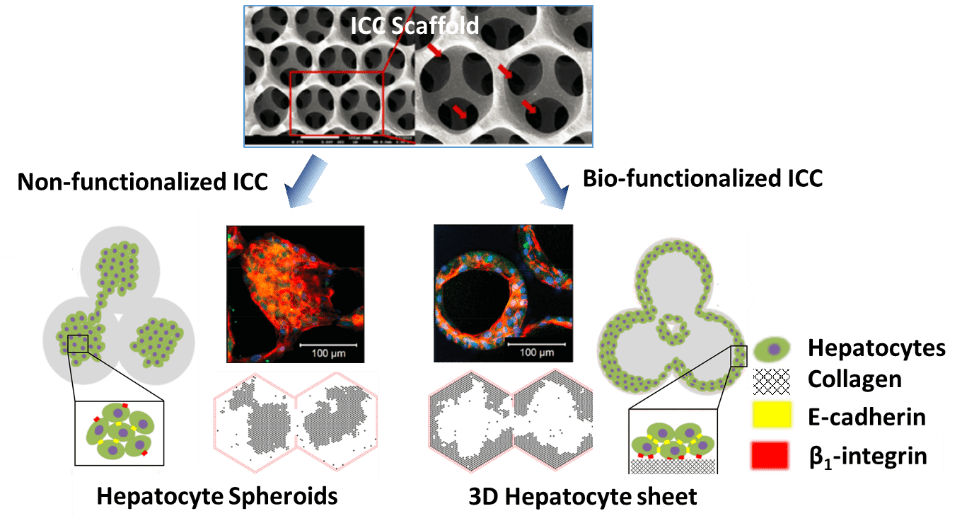 Along the same line, Kim et.al., reported a novel biofunctionalized PEG based scaffolds that promote excellent cell viability and function of the hepatocytes (liver cells). They employed an inverted colloidal crystal (ICC) technique to synthesize the micro-porous scaffolds, where the pore size and the size of the necks between pores were tuned by using an appropriate porogen particle (e.g., polystyrene beads ~ 100-200 μm). These scaffolds were then biofuntionalized with collagen type-I that has a selective response with human hepatocarcinoma cells (Huh-7.5). Their key findings suggest that non-functionalized ICC matrix prefers the formation of spheroids caused by the weak or negligible cell-surface interactions. Subsequently, the cell proliferation results in a cell aggregates at the center of the cavities (i.e., strong cell-cell interaction) mediated by the E-cadherin. In contrast, the bio-functionalized ICC gels exhibited the cell proliferation primarily occurring near the scaffold surface and thereby forming sheet like 3D cell aggregates, because of strong cell-surface (ECM) interactions mediated by the β1-integrin and N-cadherin adhesive molecules. This study clearly demonstrated the fabrication of biocompatible porous 3D scaffolds that promote better cell morphology of the Huh 7.5 cells and undoubtedly expected to have a tremendous impact on the development clinically applicable liver tissues in the future.