Beyond gene editing: A new role for CRISPR

A new use for the revolutionary gene-splicing tool. This new “Electrochemical CRISPR” can quickly and accurately identify viral biomarkers for a range of diseases, including HPV and Parvovirus. 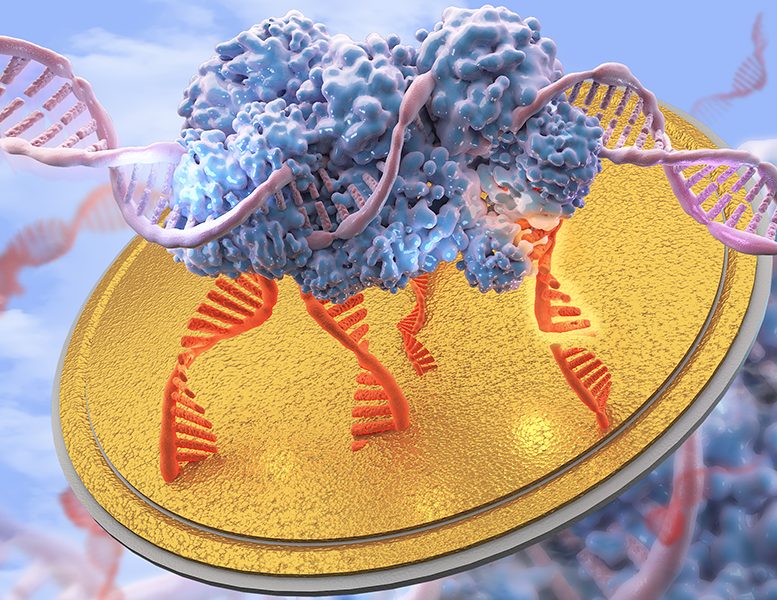 CRISPR gene editing tools have emerged as a simple yet powerful technology for editing the human genome by adding, deleting, or altering DNA at specific locations. While it is simultaneously heralded as a miracle breakthrough and ethically dangerous invention, among its many useful applications, CRISPR technology has the potential to correct genetic defects and treat a range of diseases.

Now, researchers from Case Western Reserve University researchers have applied CRISPR to disease detection. In a study published in Angewandte Chemie, the team led by Professor Chung Chiun Lui has developed a universal biosensing system based on the CRISPR-Cas12a (cpf1) system, which quickly and accurately detects viral nucleic acids to identify disease biomarkers, such as those of the human papilloma virus (HPV) and parvovirus B19.

CRISPR stands for clustered regularly interspaced short palindromic repeats and was first adapted from bacteria which use it as part of their immune defense system. It consists of two components, the Cas9 enzyme, which acts as a pair of molecular scissors and cuts up the DNA of invading viruses, and an RNA guide that recognizes the sequence of DNA to be edited.

In their study, Lui and his team have developed a new system which they dubbed E-CRISPR, a platform that translates the CRISPR enzyme’s activity into a detectable electrochemical signal. “We have demonstrated an electrochemistry-based platform to probe CRISPR activity,” says Yifan Dai, Ph.D. candidate at Case Western Reserve University and first author of the study. “It is a simple method that scientists and clinicians can use as an efficient means of nucleic acid screening.”

E-CRISPR contains a single-stranded DNA sequence, tagged with methylene blue and immobilized on a gold electrode. The detection system has been set up such that in the presence of a target (i.e., viral DNA sequence), E-CRISPR cleaves this immobilized single-stranded DNA, severing methylene blue from the electrode and halting the single electron transfer (electochemical) process. This means that genetic biomarkers for any number of viruses can be easily and accurately screened using E-CRISPR. If CRISPR begins to cut, researchers and clinicians will be able to tell if a virus is present, well before symptoms begin to manifest.

“Our CRISPR gene editing tool performs target recognition based on cleavage activity,” says Yifan Dai. “From the sensing perspective, it is actually [behaving] as both a sensor and actuator in that it recognizes [its target DNA sequence] then it cleaves.” Based on this, the authors believe they have created “a new dimension of sensing science with many beneficial applications.” An electrochemical approach also has advantages over visual detection methods, such as cost-effectiveness and simplicity, Lui adds.

Their preliminary experiments successfully identified HPV and pavo biomarkers with high sensitivity and accuracy. And although preliminary experiments are incredibly promising, Dai points out that some limitations, such as the intrinsic activity of the enzyme and its relation to sensitivity as well as E-CRISPR’s ability to differentiate between point mutations and wild-type genetic sequences, still need to be addressed.

“We want [our sensor] to be capable of being stored and transported at room temperature, just like those commercial glucose sensors,” says Lui. “We believe that a portable, integrated biosensing system could really benefit resource-limited areas and increase the time-efficiency [and capabilities] of the healthcare industry.”