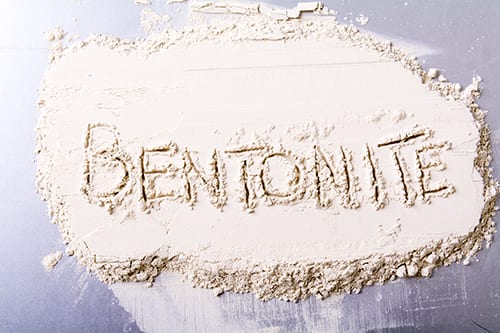 The mineral bentonite can be found all over the world. It is formed from weathering volcanic ash. It has some exceptional properties: when stirred into water, it demonstrates a so-called thixotropic reaction. It reacts as a fluid when mechanically stressed, for example shaken or stirred. However, it hardens in quiescent condition because its viscosity increases. 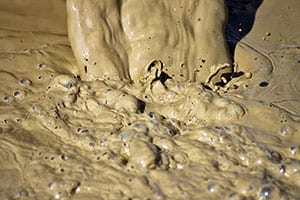 The most common use of bentonite is in drilling fluids. The bentonite in the flush fluid lubricates and cools the cutting tools while protecting against corrosion. As the drilling fluid generates hydrostatic pressure in the borehole, it hinders fluid and gas penetration. The drilling liquid conveys the drill cuttings to the surface. When the purge pumps have idle periods, the thixotrophy of the bentonite hinders the stone material from dropping back into the drilled shaft.

As a flush fluid, bentonite seals the drilled shaft from water ingress downwards and at the sides of the shaft. The mineral forms a firm sludge cake on the bore wall which provides the borehole with additional stability. The fine bentonite particles enter into the bore wall, swell and harden. Depending on the constitution of the ground structure, fine and coarse particles are needed.

The requirements of the bentonite particles are not unusual, but nonetheless critical. API 13A “Specification for Drilling Materials” precisely regulates the technical data for the bentonite in the drilling fluid.

A leading manufacturer of drilling grade bentonite in the Middle East supplies oil and gas producers worldwide. Since 2005, he has been using a NEUMAN & ESSER (NEA) grinding system for bentonite grinding. The bentonite manufacturer selection was made for a cyclone configuration with a PM 20U4 pendulum mill and an SDR Radial Classifier 1200 for coarse grinding from 15–25% > 63 μm.

What finally convinced the Middle East bentonite manufacturer was the impressive wear protection provided by the NEA mill, as the supplier of the grinding and classifying systems told. The impurities in bentonite cause increased stress, attrition and wear and tear in the mill. Nonetheless, the abrasive feed material does little to harm the mill. All the components of the grinding system are designed to be robust and wear resistant. 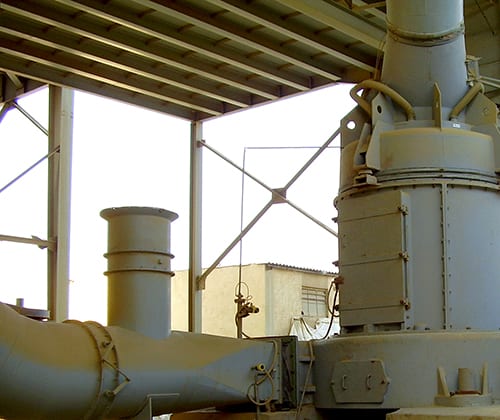 More about Bentonite:
As bentonite contains of 60-80% montmorillonite it provides special properties such as swelling and adsorption. The triple-layer silicate can absorb an exceptional quantity of water and expands by a multiple of the original size. The inner surface of a gram of bentonite is 400–600 m² – normal clay only has 2 m². The swelling and viscosity behavior of bentonite in the presence of water as well as its particularly high inner surface open numerous application options for the mineral.

Bentonite is used as a food additive as well as in cosmetics and pharmaceuticals as an additive in ceramics, in foundries, for paper and detergents and also as a surface coating in nanotechnology for varnish and paint. The multifaceted mineral is a heat stabilizer in plastics, air purgers, absorbents and binders.