Equal Channel Angular Pressing is applied to commercial purity titanium to increase its ability to resist failure due to cyclic loads. 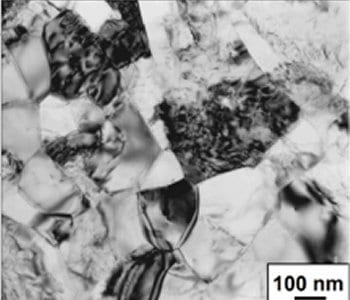 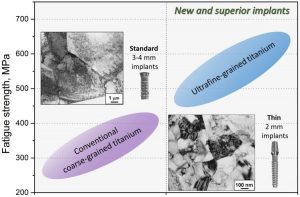 With few exceptions, dental implants to replace individual human teeth are fabricated from alloys of titanium. Titanium is preferred over other metals because it provides a combination of high strength, corrosion resistance, and exceptional biocompatibility with the types of bone found in the upper and lower jaw, and with the surrounding tissues. Unalloyed commercially pure titanium is particularly desirable because of its documented superior biocompatibility. However, its moderate strength limits its ability to withstand the high forces that can be generated from the muscles of the jaw, which can be two to three times greater than one’s body weight (particularly during sleep and night time teeth grinding). Even more important for dental applications is the need for the implant material to survive the millions of cyclic loads that teeth experience over years of use.

A new family of metal fabrication methods that increase the strength of virtually any metal or alloy has emerged from three decades of careful scientific research. These purely mechanical methods, collectively labelled as Severe Plastic Deformation (SPD) processing, impose localized shear deformation combined with high pressure to enable large changes in the microstructure, resulting in doubling and even tripling of tensile strength.

In the present research, Rimma Lapovok et al. applied a particular SPD method known as Equal Channel Angular Pressing (ECAP) to commercial purity titanium to increase its ability to resist failure due to cyclic loads. It is found that the loads needed to cause fatigue failure in ECAP processed titanium were doubled in the realms of cyclic loading that correspond to both Low Cycle Fatigue (LCF) and High Cycle Fatigue (HCF) failure modes. In the LCF range significant inelastic deformation occurs, causing microscale cracks to propagate at the microscopic level occurs during most of the load cycles. At the lower loads associated with HCF most of the load cycles incubate cracks, which subsequently propagate after they become sufficiently large. The microstructures imparted by ECAP were effective in resisting fatigue crack initiation and propagation by the distinct mechanisms that operate in both LCF and HCP regimes.

Fatigue resistance was studied in simulated body fluid to examine the synergistic effects of corrosion that can accelerate crack growth during cyclic loading. In contrast to conventional coarse grain titanium, we found that for ECAP-processed titanium the fatigue strength was not affected by the corrosive media.